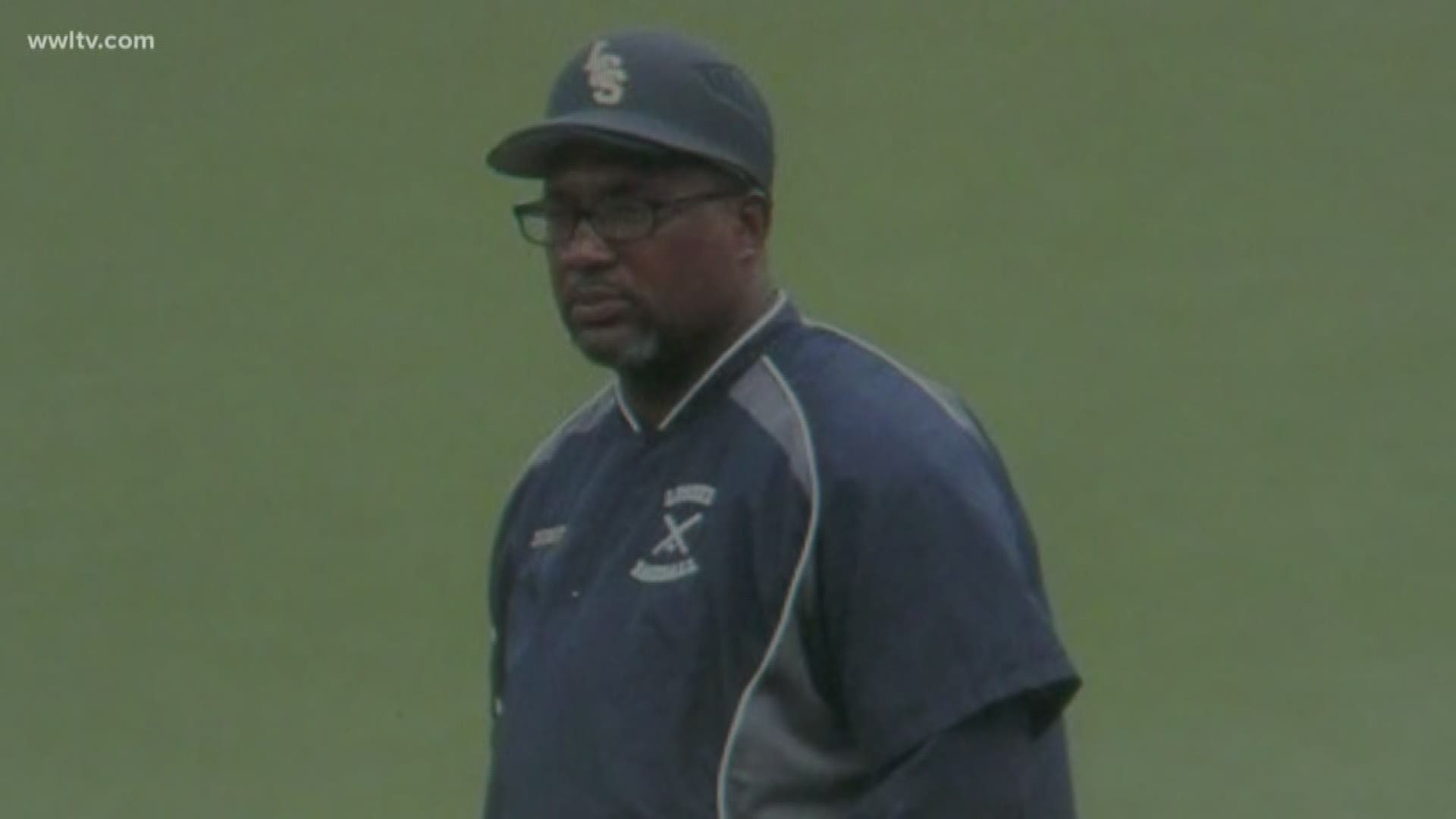 NEW ORLEANS — The coronavirus pandemic has taken a devastating toll on Louisiana, especially in hard-hit New Orleans. Every day we hear the grim numbers as they climb. But when the crisis is over, these dark times won’t be measured by statistics. They’ll be measured by the lives cut short, each soul a precious thread in the fabric of our community.

One of the first to fall was Cornell Charles, a devoted family man and longtime Zulu Social Aid and Pleasure Club member. And to thousands of kids over several decades, he was the mentor and friend they called Coach Dickey.

In normal times, the funeral for Cornell Charles would have drawn hundreds. But in this time of the coronavirus pandemic, his service Friday was limited to 10 family members. For social distancing, they spaced themselves out in separate pews. Some wore face masks.

“It just seems like a really bad nightmare that I'm hoping I can wake up from,” said Joseph Riley Jr., one of his best friends.

To Lusher Charter School athletes, Cornell was known as Coach Dickey. Few knew the nickname came Dickey Bird, from his own high school playing days. A Fortier graduate, he excelled at quarterback.

“He was a big motivational guy. He was always cheering people on,” baseball player Julian Box said.

“He always had something positive to say about everybody,” fellow baseball player Sam Kates said.

The coronavirus was not considered much of a local threat on March 12. Louisiana had only 19 cases then and no deaths. But as a precaution that day, Lusher's varsity baseball game against Riverdale was played with empty stands. No fans, not even parents.

More troubling to Box and Kates, the team's two seniors, was the condition of Coach Dickey.

“He was a little quiet that last game, just because he wasn't feeling very well,” Box said. “But I still heard him shouting out to the pitcher during the game, trying to get them going. Using all his energy to try and help the team out.”

“He had a pretty bad cough that game,” Sam Kates. “He wasn’t as loud. We could tell something wasn’t right.”

In the days after that game, a close loss, things went from bad to worse. As the virus exploded, schools closed statewide. The baseball season was cut short, ending Lusher's first run at a district title in years.

“It was really tough for a lot of the boys,” said Lusher’s head baseball coach Kyle Walther. “Because they could kind of see this was a year we could make a run.”

For the seniors, there would be no next game, no next season. Kates, a pitcher finally healthy after years of injuries, would not get to show scouts his 84-mile-and-hour fastball. Box, first baseman and cleanup hitter, was having his best season.

“It was really my chance to be a leader, like a real leader on the team,” Box said.

At the time, the boys did not know Coach Dickey was in the hospital.

One of the few people from the Lusher community who knew was Lusher Athletic Director Louis Landrum. He talked to Coach Dickey by phone.

“I told him, we'll be thinking about him. We'll be praying for him,” Landrum said. “And that was our last conversation.”

For the boys, disappointment over a lost season became devastation over the loss of a mentor. Coach Dickey died on March 24, during an ominous two-day stretch in which the state's death rate more than doubled from 20 to 46.

The final baseball game was the last time Coach Dickey’s players would ever see him. His booming voice still echoes in their heads.

“When you were up on the mound, he’d always yell, ‘Bend your back. You're the best in the world!” Kates recalled.

“It seemed a little funny how he'd say ‘you're the best in the world’ to a bunch of high school kids,” Box said. “But it meant a lot.”

“I told the guys that while we won't hear Coach Dickey say these things again,” he said. “All those things we'll continue to say in the dugout. He'd always tell the kids, you're the greatest in the world.”

Landrum took it especially hard. When the school was created out of the floodwaters of Katrina in 2007, Landrum was the first coach hired, picked to create a football program. Dickey was second.

“It crushed me a lot. It really did,” Landrum said. “It felt like a part of me left.”

Stay-at-home orders due to the virus left the Lusher coaches, players and students to grieve in isolation. No hugs, no shoulders to cry on.

But the calls and texts started flooding in.

“I started getting calls and text messages from former players, all the way back from when we first started,” Landrum said. “All day, every day. Overwhelming.”

The outpouring for Coach Dickey began to spread to every corner of the city. The regulars at the seafood dinners he cooked and served at his house on Sundays. The Zulu club, where he was an officer.

And all those Lusher athletes? Multiply that by hundreds of kids over 30 years here at Harrell Stadium, a NORD park, where Coach Dickey was a father figure in some of the city's toughest neighborhoods.

“We buried 12 kids out here that played for us, didn't make 20 years old,” said Riley, who coached side-by-side with his friend for more than 30 years.

Riley, the head football coach at the playground, relied on Dickey as his trusted offensive mastermind. The park turned out several players who made it to the NFL, including former New Orleans Saints defensive back Delvin Breaux.

But Riley said he and Coach Dickey always measured success by the other kids, the ones they kept from falling through the cracks.

“Me and Coach Dickey we bought them school clothes, school shoes, paid for trips,” Riley said. “This was sacred ground. Any of the troubles outside of these fences, they knew not to bring them in here.”

Some kids may not have had much at home, but at Harrell Coach Dickey helped bring them glory on the field, and the lasting pride that goes with it. A grainy home movie from 1994 shows Riley and Coach Dickey celebrating a football championship, the first of a remarkable run of four championships in five years.

Riley said he remembers the moment like it was yesterday, reciting the exact words Coach Dickey is yelling in the silent movie clip: “Back to back, and we'll be back. Three-peat.”

“Afterward, I said ‘Dickey, what are you doing? It's almost impossible to do two in a row.’ Three? Well, we won that third in a row.”

The one year that the Harrell Rams didn’t win the championship during that dominant stretch is equally telling about Coach Dickey’s character.

It was 1996, and the Rams won their first three games in a row, crushing each opponent by more than 40 points. But heading into their third game, Riley and Coach Dickey noticed a discrepancy on the birth certificate of one player. They quickly discovered that the player was too old for the NORD league and his mother had altered his paperwork so he could play.

“Coach Dickey immediately said we had to bring it to the league officials,” Riley said. “We did and we had to forfeit those games. We told the kids it was our fault, it was on us. That’s the kind of integrity he had.”

Later, when Coach Dickey was hired by Landrum to help launch the Lusher athletic program, he recommended Riley for an assistant football coaching job. Landrum snapped him up, and the two men shared a decade on the Lusher sideline.

“He was like a brother to me,” Riley said. “In fact, I spent more time with him than I did with my own brothers.”

When Riley heard Coach Dickey was sick with COVID-19, when he tried to call, his wife explained that he was unable to talk.

“I always thought he'd come out of it. That's how much confidence I had in him. I knew he was a strong guy and he was a fighter,” Riley said.

Then came one of Riley’s darkest days.

“One of our ex-players called me and he told me, Coach Dickey's gone,” he said, trying to compose himself. “We were a team. And now the team's broken. It's going to be pretty hard to even coach. Period.”

The virus robbed Cornell Charles of a proper funeral send-off, but a live video of the ceremony drew thousands of views on Facebook. And when the community survives this pandemic, those touched by Coach Dickey have vowed to come together.

Coach Walther said he still having a hard time processing the loss of his assistant coach. He said that may have to wait until the virus has subsided and the team can reunite.

“Once we go back and we're all together as a community and we put the team together again and play our first game or have our first practice and Coach Dickey's not there, then it's really going to sink in,” Walther said.

Box reflected on what really made Coach Dickey special.

“Everybody loved Coach Dickey,” he said. “I've actually never met anybody who didn't actually love Coach Dickey. He was just one of the nicest people.”

Cornell Lamar “Coach Dickey” Charles is survived by his wife Nicole, his parents, a brother, two daughters and a granddaughter.

RELATED: Tuesday's 'Pink' Supermoon to be biggest, brightest of 2020

RELATED: Gang leader shot to death after release from jail due to coronavirus