Speaker Pelosi said failure to wear a mask on the House floor is a 'serious breach of decorum' and lawmakers could be removed from the chamber if they don't use one. 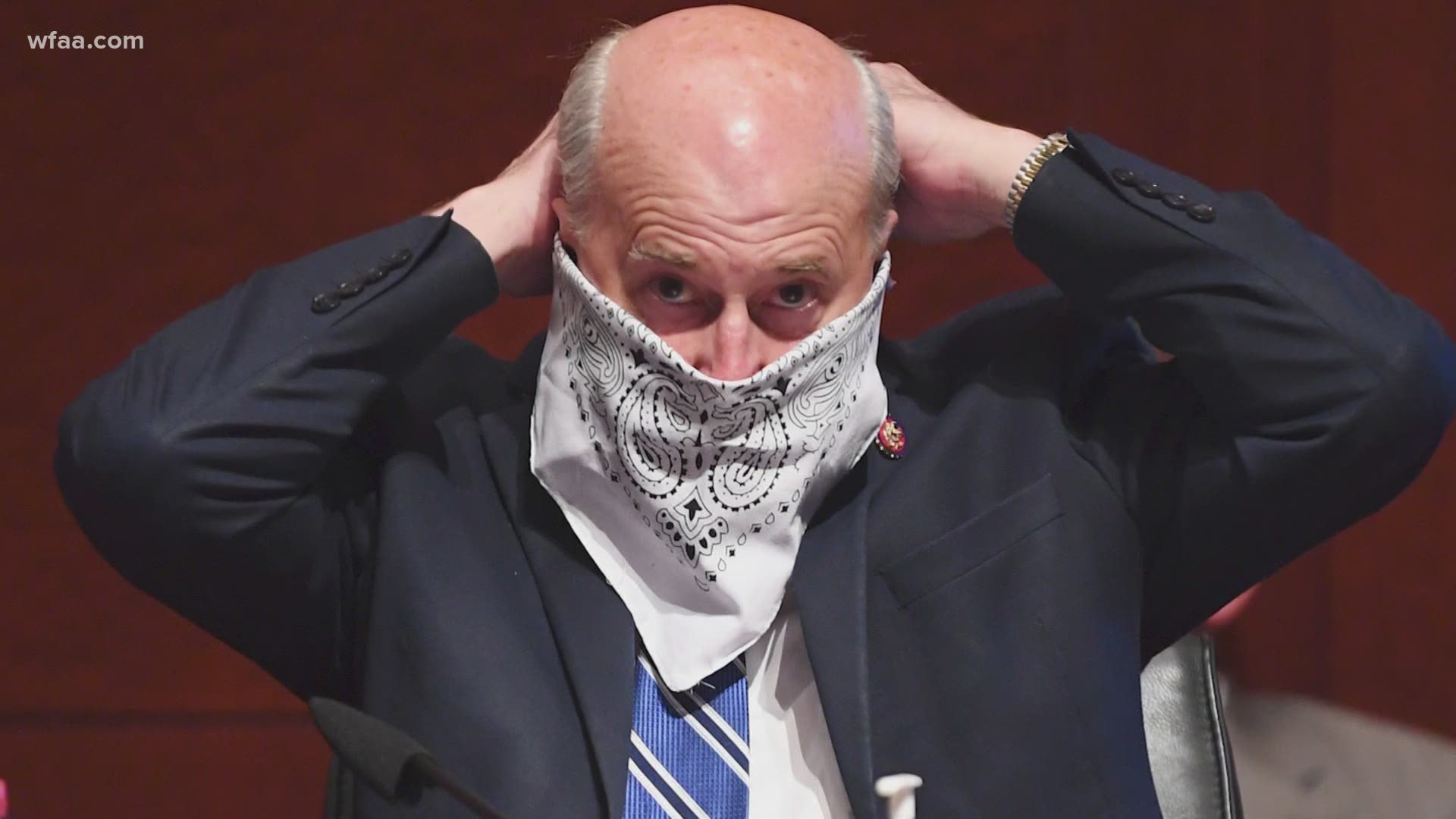 WASHINGTON — House Speaker Nancy Pelosi will require that masks be worn on the House floor after a Republican member of Congress tested positive for the coronavirus. The member, Texas Rep. Louie Gohmert, often shunned wearing masks and was known to vote without one.

Pelosi announced on the House floor Wednesday evening that all members will be required to wear a mask and one will be provided if they forget. She said failure to wear a mask is a “serious breach of decorum” and members could be removed from the chamber if they aren’t wearing one. They will be able to temporarily remove them while speaking, however.

“It’s a sign of respect for the health, safety and well-being of others present in the chamber and in surrounding areas,” Pelosi said.

Gohmert tested positive just before he was scheduled to travel to his home state with President Donald Trump. He was forced to abruptly cancel his plans, and immediately faced criticism from colleagues for not always wearing a mask on Capitol Hill, where face coverings are not mandatory and testing is sparse. “A selfish act,” one lawmaker said.

The 66-year-old Gohmert, one of the House’s most conservative and outspoken members, told a Texas news station that he tested positive at the White House and planned to self-quarantine. He is at least the 10th member of Congress known to have tested positive for the coronavirus.

The congressman's positive test raised further questions about the lack of mask and testing requirements in the Capitol as members frequently fly back and forth from their hometowns and gather for votes, hearings and news conferences.

Several GOP senators said they were pushing for more regular testing in the Capitol.

“I think particularly for members of Congress who are going back and forth, they represent sort of the perfect petri dish for how you spread a disease,” said GOP Sen. Roy Blunt of Missouri, chairman of the Senate Rules Committee. “You send 535 people out to 535 different locations, on about 1,000 different airplanes, and bring them back and see what happens. It seems to me there’s a better path forward.”

An eight-term lawmaker, Gohmert participated in the House Judiciary Committee hearing Tuesday where Attorney General William Barr testified. Before the hearing, Gohmert was seen approaching the meeting room a few feet behind Barr, and neither man was wearing a mask.

Gohmert also voted on the House floor Tuesday and attended a House Natural Resources Committee hearing, where a staff member could be seen sitting close behind him on the dais as he talked without a mask. The chairman of that committee, Democratic Rep. Raúl Grijalva of Arizona, announced that he would self-quarantine.

“In the meantime, my work schedule and the lives of my employees are disrupted,” Grijalva said. "This stems from a selfish act by Mr. Gohmert, who is just one member of Congress.”

When Gohmert flew to Washington from Texas on Sunday, he sat next to Rep. Kay Granger, R-Texas, who also went into quarantine after learning of her colleague's test results.

Mask-wearing is strongly encouraged but not enforced for lawmakers in the Capitol, while other workers and law enforcement officers are required to have on masks. There is no required testing, and lawmakers, reporters and staff often ignore health authorities' advice to stay several feet apart.

Pelosi has tried to encourage mask use, and committees have rules requiring the wearing of face coverings in hearing rooms. They still won't be required in hallways or personal offices, which are often cramped.

Senate Majority Leader Mitch McConnell, R-Ky., has also pushed the use of masks, and most senators have worn them. But a few have refused, including Kentucky Sen. Rand Paul, a doctor who says it's unnecessary because he previously tested positive for the virus. There is no proven science saying that a person cannot get the virus again.

In a television interview, Gohmert said he was given a rapid test by the White House that came back positive, and then took a more thorough test to rule out a false positive. That test came back positive as well, so “apparently I have it," Gohmert told KLTV's East Texas Now.

Gohmert, who has questioned mask use for months, also went as far as to say that wearing a mask may have been how he contracted the virus. Medical experts say masks are one of the best ways to prevent transmission of the virus, which is thought to mainly spread through people who are in close contact.

After Gohmert tested positive, Justice Department spokeswoman Kerri Kupec said Barr would be tested Wednesday. Gohmert did not wear a mask while questioning Barr, but the seats in the hearing room are spaced many feet away from one another and it is common practice to remove masks during questioning.

During the hearing with Barr, the committee chairman, Rep. Jerrold Nadler, D-N.Y., chastised some of Gohmert’s GOP colleagues for not wearing masks when they weren’t speaking. Nadler did not call out Gohmert by name.

In a tweet Wednesday, Nadler said: “When individuals refuse to take the necessary precautions it puts everyone at risk. I’ve regularly instructed all members to wear their masks and hope this is a lesson by all my colleagues.”

“It’s not a joke, not a conspiracy theory, not a game,” Jayapal said. “It’s serious — it’s public health & science. By refusing to consistently wear a mask, Rep. Gohmert & other Republican colleagues have not only put us in harm’s way but our staff, families, Capitol workers too.”

Multiple GOP senators said Wednesday they were pushing McConnell to allow expanded testing. McConnell and Pelosi jointly rejected Trump's offer for rapid testing for lawmakers in May, saying they wanted instead to direct resources to front-line workers.

That decision has rankled some of their colleagues, including Blunt and Sen. Lamar Alexander, chairman of the Senate Health, Education, Labor and Pensions Committee.

Blunt said he believes that lawmakers who are traveling should be tested every time they travel, and that staff and others should be tested occasionally. He said McConnell and the Capitol physician would have to be on board for that to happen, and he doesn't know why they aren't.