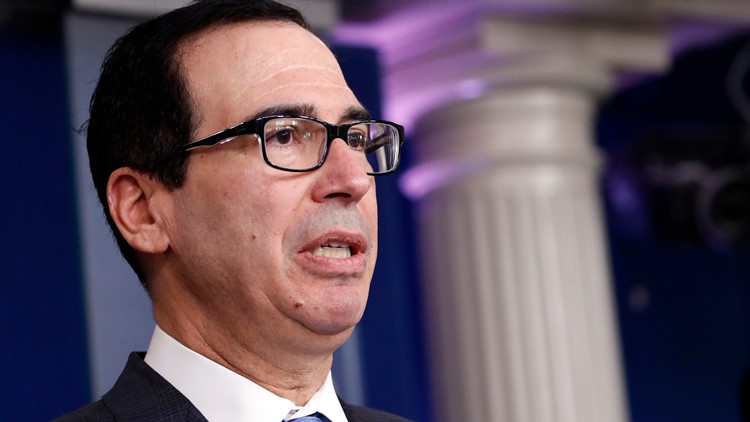 Family of 4 could get $3,000 under virus relief plan, Mnuchin says

WASHINGTON — The first federal checks to families could be $3,000 for a family of four under the White House proposal to unleash $1 trillion to shore up households and the U.S. economy amid the coronavirus outbreak.

Treasury Secretary Steven Mnuchin said Thursday that the “checks in the mail” would be direct deposited into people’s accounts under the plan the Trump administration has proposed to Congress.

The payments would be $1,000 per adult and $500 per child so that a family of two parents and two children would receive $3,000, Mnuchin told Fox Business Network. The goal is to get that money out in three weeks, he said.

“That’s a lot of money for hard-working Americans,” Mnuchin said.

He said such families would receive another $3,000 six weeks later if the national emergency still exists. Officials have previously said the money is expected to be allocated by income level, to exclude the super-wealthy.

Congress is rushing to compile the sweeping economic rescue package, the biggest undertaking since the 2008 recession and financial crisis, in a matter of days.

Details on Trump's economic rescue plan are still being worked out — and it's sure to grow beyond $1 trillion, lawmakers said — but its centerpiece is to dedicate $500 billion to start issuing direct payments to Americans, starting early next month.

The emerging package would also funnel cash to businesses to help keep workers on payroll as widespread sectors of the $21 trillion U.S. economy all but shut down.

It also is expected to include sweeping health provisions. President Donald Trump has invoked war-time authority to ramp up output of vital medical supplies and erect temporary field hospitals under the Defense Production Act.

“There is not a day to lose," House Speaker Nancy Pelosi said in a statement Thursday. "We must put more testing, more protective equipment and more ventilators into the hands of our frontline workers immediately.”

RELATED: Treasury proposes sending $500B in checks to Americans

Taken together, the administration plan promises half of the $1 trillion to families and individuals, with the other half used to prop up businesses and keep employees on payroll.

Direct payments would go to U.S. citizens only, and would be “tiered based on income level and family size.” The two payments would be identical, with the second wave starting by May 18.

Trump has already signed into law a $100 billion-plus bill to boost testing for the coronavirus and guarantee paid sick leave for millions of workers hit by it.

The Senate plans to remain in session until the third coronavirus bill passes, with weekend sessions possible. The pressure is enormous on lawmakers to act fast and not allow gamesmanship to get in the way of results.

Economists say the country is probably already in recession. The panic has many lawmakers shedding their ideological baggage to grapple with an enormous undertaking for a crisis that exceeds the scope of the 2008 financial panic — a virtual weekslong shutdown of many businesses and unemployment that could spike to 20% by some estimates.

Senate Majority Leader Mitch McConnell is trying to take control of the third coronavirus effort, putting GOP chairmen in charge and promising to consult with Senate Democrats later. Top Senate Democrat Chuck Schumer of New York blasted McConnell's approach, saying it's “too cumbersome, too partisan and will take far too long, given the urgency and need for cooperation.”

Schumer's office says he has spoken several times already with Mnuchin, however, and retains considerable influence as the Senate plans to work into the weekend to try to pass the measure. Pelosi and McConnell have talked as well

Pelosi said late Wednesday that her priorities for the bill include expanding eligibility for unemployment insurance and aid to small businesses that ensures workers will be paid. Democrats are also sure to seek aid to states whose budgets are falling out of balance.

Sen. Roger Wicker, R-Miss., the chairman of a GOP task force responsible for a $50 billion airline rescue package, says there won’t be a cash bailout like after the 9/11 attacks, but that Republicans are reviving an emergency loan program from that time to provide airlines federally guaranteed loans on favorable terms. The airlines are under criticism from Democrats for using cash stockpiled from large recent profits and lower corporate tax rates to buy back stock in order to inflate their share price.

“For the airlines and the cargo carriers there’s likely to be a collateralized loan provision that is designed after the 2001 statute” enacted immediately after the 9/11 attacks. “It’s the exact language from 2001.”

Economists doubted that the massive economic rescue package being drafted would enough to stop millions of jobs losses, even if in the short term. It's aimed at helping Americans without paychecks avoid foreclosure and other financial hardships and preventing businesses from sliding into bankruptcy.

In the House, Reps. Mario Diaz-Balart, R-Fla., and Ben McAdams, D-Utah, released statements saying they had tested positive for COVID-19 — the first two known cases in Congress. Several other lawmakers have cycled in and out of self-isolation after exposure to individuals who had later tested positive for the virus.

For most people, the new coronavirus causes only mild or moderate symptoms, such as fever and cough. For some, especially older adults and people with existing health problems, it can cause more severe illness, including pneumonia.

The vast majority of people recover from the new virus. According to the World Health Organization, people with mild illness recover in about two weeks, while those with more severe illness may take three to six weeks to recover.

The Associated Press receives support for health and science coverage from the Howard Hughes Medical Institute’s Department of Science Education. The AP is solely responsible for all content.