Coronavirus whistleblower warns Congress that US lacks plan for vaccine

Dr. Rick Bright is warning that without a planned response based on science, the pandemic could worsen later this year. 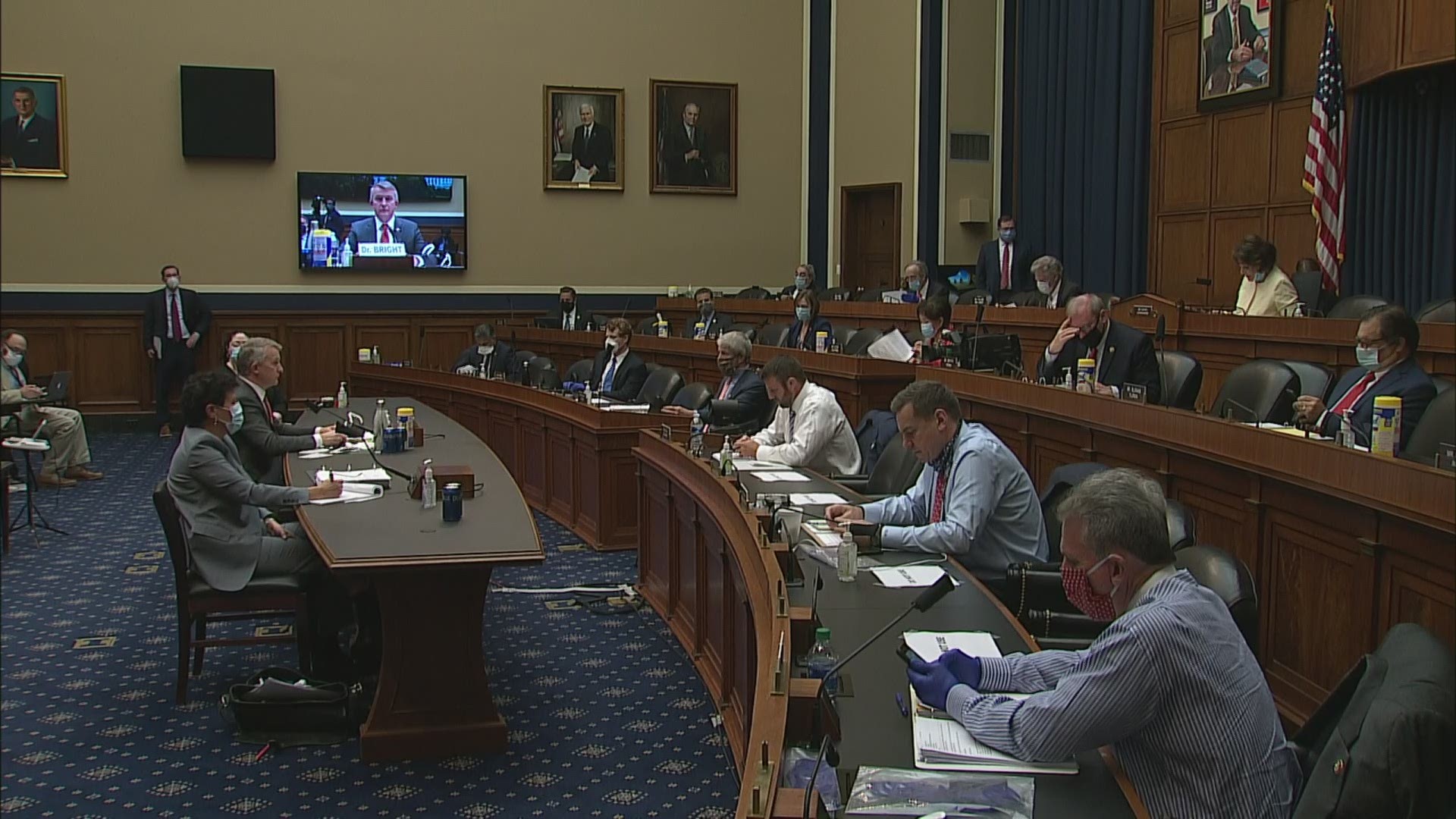 WASHINGTON — Despite White House claims, the U.S. still lacks a comprehensive battle plan against the coronavirus in critical areas including masks, testing, treatments and vaccines, whistleblower Rick Bright warned Thursday in testimony before a House committee. “Our window of opportunity is closing," he declared.

The nation could face “the darkest winter in modern history” if the virus rebounds, the government vaccine scientist told lawmakers. Bright's appearance came after his ouster last month as head of a Health and Human Services biodefense agency, an action he alleges was retaliation by the Trump administration.

“We need still a comprehensive plan, and everyone across the government and everyone in America needs to know what that plan is, and what role they play,” he told the House Energy and Commerce Committee. “There are critical steps that we need to do to prepare ... we do not still have enough personal protective equipment to manage our health care workers ... we still do not have the supply chains ramped up for the drugs and vaccines, and we still don’t have plans in place for how we distribute those drugs and vaccines. We still do not have a comprehensive testing strategy.”

At the White House, President Donald Trump said Bright looked like an “angry, disgruntled employee,” and Bright's boss, HHS Secretary Alex Azar, said, “Everything he is complaining about was achieved."

“So this is like somebody who was in a choir and is now trying to say he was a soloist back then,” Azar added.

Credit: AP
Dr. Richard Bright, former director of the Biomedical Advanced Research and Development Authority, arrives for a House hearing to discuss protecting scientific integrity in response to the coronavirus outbreak, Thursday, May 14, 2020 on Capitol Hill in Washington. (Greg Nash/Pool via AP)

Trump, said later, at a Pennsylvania medical equipment distributor, that the U.S. is ramping up production of COVID-19-related items and that his goal “is to produce everything America needs for ourselves and then export to the world, including medicines."

Bright spoke in measured tones and rarely raised his voice during five hours of questioning. He didn't question the fact that there's now an all-out effort, financed by billions in taxpayer dollars, to procure masks and other supplies, develop better tests and treatments and discover an effective vaccine. His point was that those efforts aren't being fitted together in a coherent strategy that will get supplies and medicines to where they're most needed to protect people and prevent shortages and price gouging.

Asked by Rep. Joe Kennedy, D-Mass., if administration officials have prepared the country for the “moment we are in” and the months ahead, Bright responded, “I think we have a lot of work to do to be prepared.”

Rep. Frank Pallone, D-N.J., asked if he should be concerned that Americans will have problems getting access to a vaccine when it's available. Bright responded, “Absolutely, sir.”

Bright, a career official, alleges he was removed as head of the Biomedical Advanced Research and Development Authority after repeatedly warning higher-ups the virus outbreak was going to be worse than the public was being led to believe.

He said the breaking point came when he opposed a White House directive to allow widespread access to hydroxychloroquine, a malaria drug Trump was touting as an effective treatment.

The FDA recently warned against its use for COVID-19, except in limited circumstances. But at the White House on Thursday, the president was still bullish. “We’ve had tremendous response to the hydroxy,” Trump said. "So, a lot of people have sworn by it, and we’ll see.”

Republican lawmakers for the most part were careful not to attack Bright directly. But Rep. Markwayne Mullin of Oklahoma criticized him for continuing to collect his $285,000 salary while first on sick leave for a spike in blood pressure, and now on vacation as he tries to straighten out his work situation.

“You’re too sick to go into work, but you’re well enough to come here while getting paid,” said Mullin. “I have a hard time understanding that.”

Bright said one of the worst moments as he tried to raise alarms came when repeated efforts to jump-start U.S. production of respirator masks went nowhere.

He recalled getting emails in late January from Mike Bowen, an executive at a medical supply company called Prestige Ameritech, indicating that its N95 mask supply was “completely decimated.”

“And he said: ‘We’re in deep (expletive). The world is. And we need to act,’” Bright said. “And I pushed that forward to the highest levels I could in HHS and got no response. From that moment I knew that we were going to have a crisis for our health care workers because we were not taking action.”

RELATED: Here is the Rand Paul - Anthony Fauci exchange people are talking about

Following Bright to the witness table, Bowen told lawmakers he's a Republican who voted for Trump. He paused then, and added that he admires Bright.

As part of his whistleblower complaint, Bright is seeking to be reinstated in his old job. A federal watchdog agency has found “reasonable grounds” that he was removed as a reprisal.

HHS, Bright's employer, says it strongly disagrees with his allegations and says it reassigned him to a high-profile position helping to lead the development of new coronavirus tests at the National Institutes of Health.

Nearly 85,000 people have died from COVID-19 in the U.S., representing more than one-fourth of global deaths and the world’s highest toll, according to figures compiled by Johns Hopkins University. Worldwide more than 4.4 million have been infected and about 300,000 have died.

Bright's testimony followed this week's warning by Dr. Anthony Fauci, the government's top infectious disease expert, that a rushed lifting of store-closing and stay-at-home restrictions could “turn back the clock,” seeding more suffering and death and complicating efforts to get the economy rolling again.

Eager to reshttps://www.tegnaone.com/article/news/health/coronavirus/here-is-the-rand-paul-anthony-fauci-exchange-people-are-talking-about/507-1tart the U.S. economy, Trump has been urging states to lift restrictions, and many governors are doing so gradually, though consumers remain leery of going back to restaurants, social events and sporting competitions.

Bright, who has a doctoral degree in immunology, said the nation's path forward should be based on science. The steps include:

— Establishing a national testing strategy. The White House has urged states to take the lead on testing, even as the federal government pushes to make more tests and better ones widely available. Trump says the U.S. has “prevailed” on testing through this strategy, but in Congress Democrats are demanding a federal framework to encompass the whole nation.

— Doubling down on educating the public about basic safety measures such as frequent hand-washing and wearing masks in public places. “Frankly, our leaders must lead by modeling the behavior,” said Bright, in a not-too-subtle reference to a president who conspicuously goes maskless.

— Setting up a system to fairly distribute equipment and supplies that are scarce and highly sought. Eliminating state vs. state competition would increase efficiency and reduce costs.