The family of Landon Nobles has filed a lawsuit against Austin police and the City of Austin after Nobles was killed by police in May 2017.

AUSTIN, Texas — A lawsuit has been filed against the City of Austin and the Austin police officers who were involved in a shooting that killed a man on May 7, 2017.

Landon Nobles, 24, died in a shooting after police said he ran away from officers with a handgun. Officers said at the time of the shooting that they perceived him as a threat.

The family of Nobles claims in the lawsuit that officers used excessive force against Nobles.

According to the lawsuit, Nobles was out celebrating a birthday with his cousins on Sixth Street when they gathered with a crowd that was watching two people "fixing to fight."

A large popping sound allegedly went off in the crowd, causing the crowd to disperse. Nobles walked away from the scene, his family said.

Family identified the man who was shot and killed by police as Landon Nobles.

His family said Nobles was walking down Trinity Street when an unidentified Austin police officer allegedly threw a bike in front of him, causing him to fall. When Nobles regained his balance he was shot in the back by police, according to the lawsuit.

In the lawsuit, Sergeant Richard Egal is identified as the officer who threw his bicycle at Nobles and allegedly drew his weapon, shooting the man in the back.

The lawsuit claims Corporal Maxwell Johnson ran up to Nobles after Sergeant Egal shot him in the back and also shot Nobles in the back several times more.

Witnesses in the crowd claim Nobles was not displaying a gun and posed no danger when he was shot in the back, according to the lawsuit.

After the shooting occurred, both officers were placed on administrative leave as the case was investigated.

In Nov. 2018, the Travis County District Attorney determined the Austin officers' use of deadly force in the death of Nobles was justified.

A letter describing the district attorney's reasoning can be found here.

KVUE spoke with Nobles' family in 2017. They demanded to see security footage of the shooting because they believed there was more to the story than what the Austin Police Department had revealed.

The family's attorney referred to the embalming case report, which showed Nobles was shot in the back. It can be seen below:

A video on YouTube appears to show what happened before and after the incident. Go here to watch.

KVUE has reached out to the city for a statement on the lawsuit and is waiting for a response.

You can find the lawsuit below: 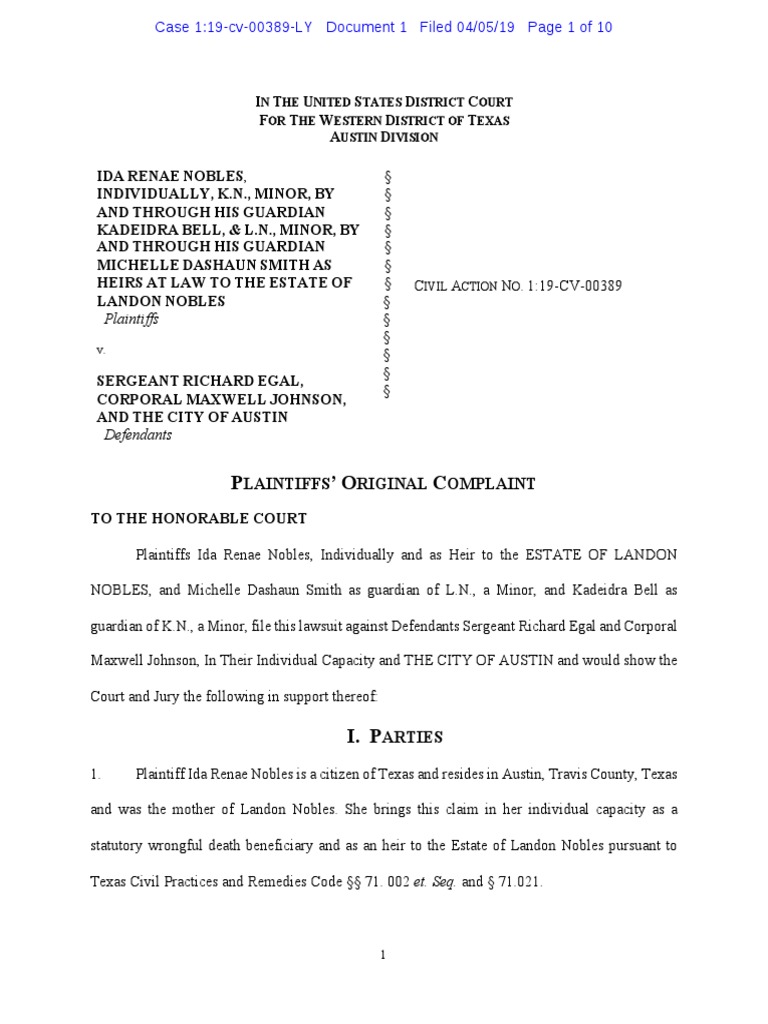 Nobles vs City of Austin | Diversity Jurisdiction | Complaint
10 Case 1:19-cv-00389-LY Document 1-1 Filed 04/05/19 Page 1 of 2 JS 44 (Rev. 06/17) CIVIL COVER SHEET The JS 44 civil cover sheet and the information contained herein neither replace nor supplement the filing and service of pleadings or other papers as required by law, except as provided by local rules of court.

Motorcyclist dies in crash with 18-wheeler in Kyle