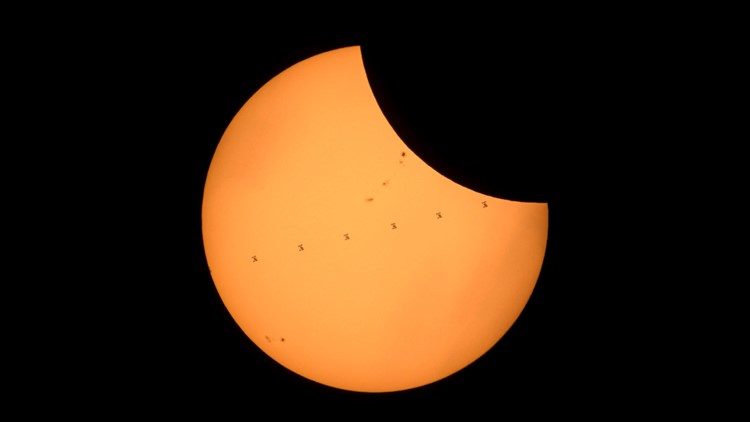 In this NASA handout, acomposite image, made from seven frames, shows the International Space Station as it transits the Sun at roughly five miles per second during a partial solar eclipse, Monday, Aug. 21, 2017 near Banner, Wyoming.

If you look closely at this photo and video of the solar eclipse, you will see a tiny speck crossing the sun. That speck is actually the International Space Station with a crew of six astronauts onboard.

Station transits sun at 5 miles per second in video taken at 1,500 frames per second with high-speed camera from Banner, Wyoming. pic.twitter.com/x6NNvCc0Af

NASA shared the video on Monday, Aug. 21 as a total solar eclipse swept across a portion of the United States. It was shot from a camera in Banner, Wyoming and was sped-up to 1,500 frames per second. The station moves at five miles per second.

Millions around the country watched the total solar eclipse, or when the moon completely obscures the sun, on Monday. It started along Oregon's west coast shortly after 1 p.m. ET (10 a.m. PT). The sky turned dark for a few minutes in the middle of the sunny day. It will end along coastal South Carolina before 3 p.m. ET.