The EPA says it found limited hazardous impacts to air quality in the Beaumont and Port Arthur areas following a fire at a chlorine plant in Lake Charles, La. 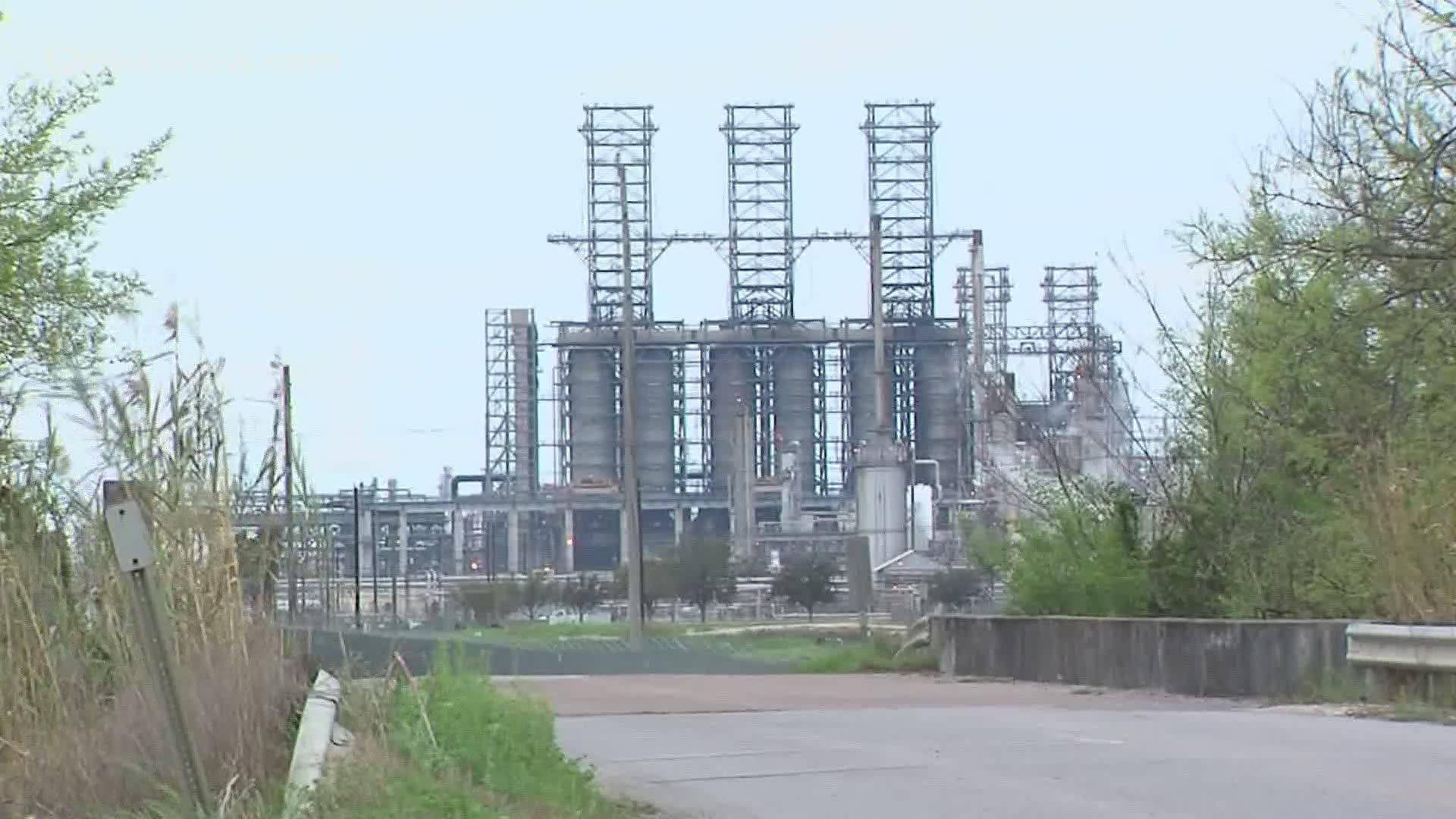 HOUSTON — In Texas, people in coastal communities that house refineries and various chemical facilities, often live in fear or anticipation of the next explosion, whether it’s caused by a hurricane or not.

“Living surrounded by refineries and chemical plants, many folks here have just succumbed to the fact that this is a way of life for them because they don't have anywhere else to go,” Hilton Kelley, an environmental activist from Port Arthur, said.

Hurricane Laura caused a fire at a chlorine plant in Lake Charles, La.

But after Hurricane Harvey, multiple news stories, reports and analysis found that pollutants were released as a result of the storm.

“The refinery grounds were flooded and when the refinery grounds get flooded, a lot of the material sometimes spills out of the ground,” Kelley, whose house was flooded during Harvey, said. “And when you're walking in that flood water, you can see the oil sheen on the water and many times that comes from various sources. But when you see a large area of oil sheen on the water, more than likely it's come from some of the refineries.”

Kelley is choosing to live in this area, this is home.

He runs Community In-Power and Development Association, CIDA Inc., a non-profit with the main purpose of helping reduce pollution in disadvantaged communities. In 2011, Kelley was the recipient of the Goldman Environmental Prize, also known as the Green Nobel Prize, awarded to grassroots environmental activists.

“This work is helping to create a better quality of life,” he said.

Kelley was born in a historically African American community in Port Arthur.

“On the west side of Port Arthur, literally on the other side of the tracks,” he said.

He left, pursued several careers, including acting, but in 2000 chose to come back.

“I fell in love with my hometown all over again” he said. “People talk, people engage with one another. And I appreciate that.”

Hurricanes like Harvey haven’t scared Kelley away. In fact, Kelley is choosing to live in Port Arthur to advocate he says, for people who don’t get a choice in where they stay.

“Some people are here because they can’t afford to live anywhere else,” he said. “I mean, a lot of properties up against these industries’ fence line is very cheap because you don't have a lot of folks that want to live in these areas.”

“The air here oftentimes smells like someone that's torn their roof all day long, all week long,” he said.

Kelley said each storm renews worries for coastal communities, worries about having to evacuate, wondering if their home will survive nature or the chemical plant near it.

“That fear is what if one of these plants explodes?” he said. “During Hurricane Harvey in 2017 there was an explosion at one of the storage tanks that store a lot of fuel. It rattled windows, shattered some windows near the plant. These things are always in the back of your mind. You know, when is the next big explosion? And we live with that, even when there's not a hurricane being predicted or coming our way. I mean, this is a daily concern that we have because many times we see flaring events or you hear loud booms and whatnot at the facilities. It’s just the way of life here.”

“I think the petrochemical industry recognizes it has a tremendous responsibility, and companies spend a great deal of resources in order to protect the communities in which they operate in. In order to be the neighbors that they should be,” Todd Staples, president of Texas Oil & Gas Association told KHOU 11. “And through innovation and technology, more and more is being done every year. Fuels are cleaner today than they were, you know, decades ago. Emissions are less. And it's a real sign of a strong commitment to be the kind of partner with this state and with these communities.”

“There are huge vulnerabilities in our infrastructure that is in coastal areas directly in the path of severe storms,” said Gretchen Goldman, research director at the Center for Science & Democracy, at the Union of Concerned Scientists, a non-profit organization that looks for ways science can be used in policymaking.

“This is especially true of our petrochemical industry, which is very concentrated around the Gulf Coast in Texas and Louisiana. And we see time and time again when a storm comes through. There are incidents, we have explosions. We often have spills of oil or other harmful chemicals into communities. It's very preventable because we have lots of ways that we should be addressing these kinds of issues.”

“There are things they can do to make the facilities safer when such incidents occur,” Goldman said. “For example, they can minimize how many hazardous substances they have on site, what the volume of materials they have is there, because the more they have, we know that risks bigger explosions, more emissions, if something were to happen. And so there's lots that companies can do to mitigate those risks if they listen to the advice of communities, if they listen to that chemical safety board, which issues advice on this kind of thing, there is not a shortage of recommendations here.”

“And that often means doing a whole lot of emitting of hazardous material that they’re just trying to burn off to shut down,” she said.

Staples said following each storm, a review and assessment with regulators takes place to make certain best decisions were made to minimize the impact.

Kelley said he’ll continue to demand more for his community, for people who live here by choice, for those who don’t and for everyone else.

“It would be behoove all of us to fight for environmental justice,” he said. “When you talk about pollution, pollution just doesn’t stay in those communities. When you see that smoke coming off the tip of that debris, that smoke sometimes travels in upwards of 30 to 40 miles away from the source. So let's work together on fighting for environmental justice for all people.”

On its website, ahead of Hurricane Laura, TCEQ said it was prepared to monitor air and drinking water, as well as sewage and flood water.

In two emailed statements, the American Petroleum Institute, API, which represents some of the natural gas and oil industry in the U.S. told KHOU 11, “companies in the U.S. natural gas and oil industry take the threat of severe weather seriously and have developed extensive preparedness measures to safeguard employees, neighboring communities and the environment, including shutting down and evacuating offshore production platforms and idling onshore facilities,” wrote Scott Lauermann, API spokesman. “Even when a storm is not on the horizon, companies are continuously evolving with innovations, technology and continuous learning to further enhance physical and operational resiliency throughout the supply chain.”

“Refineries and petrochemical plants often shutdown in advance of a major storm like Laura in order to ensure the safety of employees, protect communities and minimize potential damage,” said Ron Chittim, vice president of Downstream Policy at API. “It’s not unusual for a refinery to have periods of flaring during the shutdown or restart of a facility,” the statement continues. “Flares are used to remove waste gas from the system in a safe, controlled manner that prevents the release of hazardous or combustible materials. Refineries make every effort to minimize flaring and new or upgraded facilities often have systems that capture some of the substances, eliminating the need for them to be burned off.”