Gerald Wayne Williams, 34, is now charged with murder in the July 6 fatal shooting of 17-year-old David Castro. Williams remains on the run. 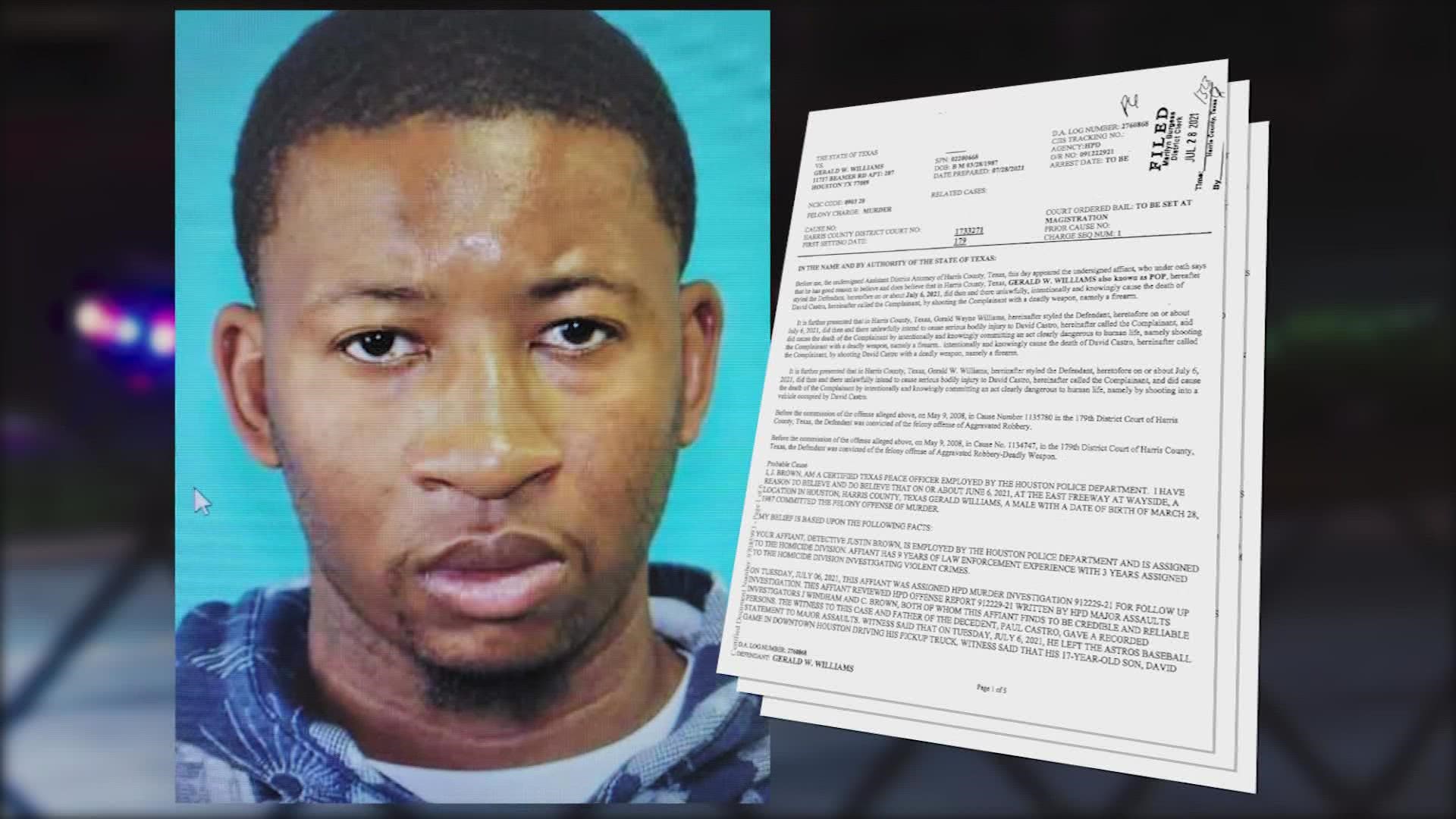 HOUSTON — Houston police identified and charged a suspect who is wanted in connection with a road rage shooting that left a teen dead following an Astros game earlier this month.

Gerald Wayne Williams, 34, has been charged with murder in the July 6 shooting of 17-year-old David Castro. Williams has not been taken into custody.

According to court documents, while leaving the Astros game, Paul Castro, David's father, had a verbal altercation with a man driving a white Buick. They said the Buick began following them through the downtown area.

Paul Castro sped away to try to avoid the suspect, according to court documents. As Castro made a U-turn at the East Freeway at Wayside, witnesses told police several gunshots were fired through the back window of Paul Castro's truck. David Castro was struck and later died from the injuries, authorities said.

Court documents said officers got surveillance video at a nearby Valero and found two shell casings at the turnaround in front of the gas station.

WANTED: This is Gerald Wayne Williams, 34, now charged with murder in July 6th fatal shooting of a teen in a road rage incident.

Police said a car matching the description was put on sale through Offer Up so they tracked down the person who posted the ad. According to court documents, Williams bought a Buick Lacrosse on May 30, and that the vehicle couldn't be found after the deadly shooting.

Police said the burned car was found in a field near Williams’ house and cell phone records placed Williams in the area of the shooting at the time it occurred.

Father of victim speaks out

Paul Castro said he is hopeful that the community will help find Williams soon.

“Our family is relieved to see that the police have been able to identify a name a suspect. We are hopeful that the community will be on the lookout for this person who is very dangerous,” he said.

Court documents also said a witness described conversations with Williams in which he proved his involvement with the shooting.

And now all the family wants is for the man responsible to be found.

“We're just hopeful at this point that justice prevails, that this man is arrested and brought to trial and that trial be speedy and swift and just and then when that happens, that we can have just a just a little bit of peace and solace,” Paul Castro said.

Police said they interviewed Williams on July 21 and he denied his involvement in the shooting. But now, with these charges, police hope to track him down soon.

Houston police are asking anyone with information about Williams to call 713-308-3600 or provide an anonymous tip to Houston Crime Stoppers by calling 713-222-TIPS (8477). There's a $10,000 reward for information leading to an arrest.