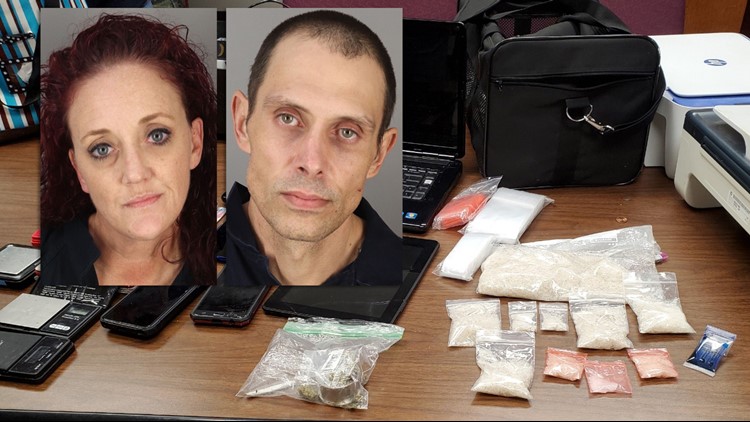 BEAUMONT, Texas — A Southeast Texas couple is now sitting in jail after being arrested on drug charges after deputies found a pound of meth at a home in Nederland Sunday evening.

Joshua Ray Bergeron, 38 and his girlfriend, Keri Colleen Beck, 43, were both arrested by Jefferson County deputies on charges of possession of a controlled substance and fraudulent use/possession of identifying information according to a news release from the sheriff’s office.

Deputies with the sheriff’s office narcotics division served a search warrant at a home in the 1500 block of South 27th St and found more than a pound of suspected methamphetamine, a large assortment of drug paraphernalia and a small amount of suspected marijuana the release said.

Bergeron and Beck were at the home when the search warrant was served.

Beck and Bergeron are charged with possession of controlled substance and fraudulent use or possession of identifying information. Their bond is set at $50,000 each.

Deputies also found checks, credit cards and other “personal documents” they believe were stolen from people in Jefferson and Chambers Counties according to the release.

Nederland and Port Neches Police officers are assisting in the investigation.

On Sunday, January 19th, 2020 around 7:00 PM, Detectives with the Jefferson County Sheriff’s Office Narcotics Division, executed a search warrant in the 1500 block of South 27th Street, in Nederland, Texas. During the course of the search warrant, Detectives located 43 year old Keri Colleen Beck and her boyfriend 38 year old Joshua Ray Bergeron at the residence.

A search of the residence was conducted and Detectives located over one pound of suspected Methamphetamine worth an approximate street value of $19,500.00. Detectives also found a small amount of suspected marijuana along with a large assortment of drug paraphernalia.

Detectives also recovered checks, credit cards and other personal documents believed to have been stolen from victims in Jefferson and Chambers County. The suspects were also in possession of equipment used to produce fraudulent documents by using the victim’s personal information for monetary gain.

Detectives arrested 47 year old Keri Beck and 38 year old Joshua Bergeron. They were booked into the Jefferson County Correctional Facility on the charges of Possession of a Controlled Substance and Fraudulent Use/Possession of Identifying Information. The Investigation is continues.