We are covering the trial of suspected serial killer Billy Chemirmir from gavel to gavel. 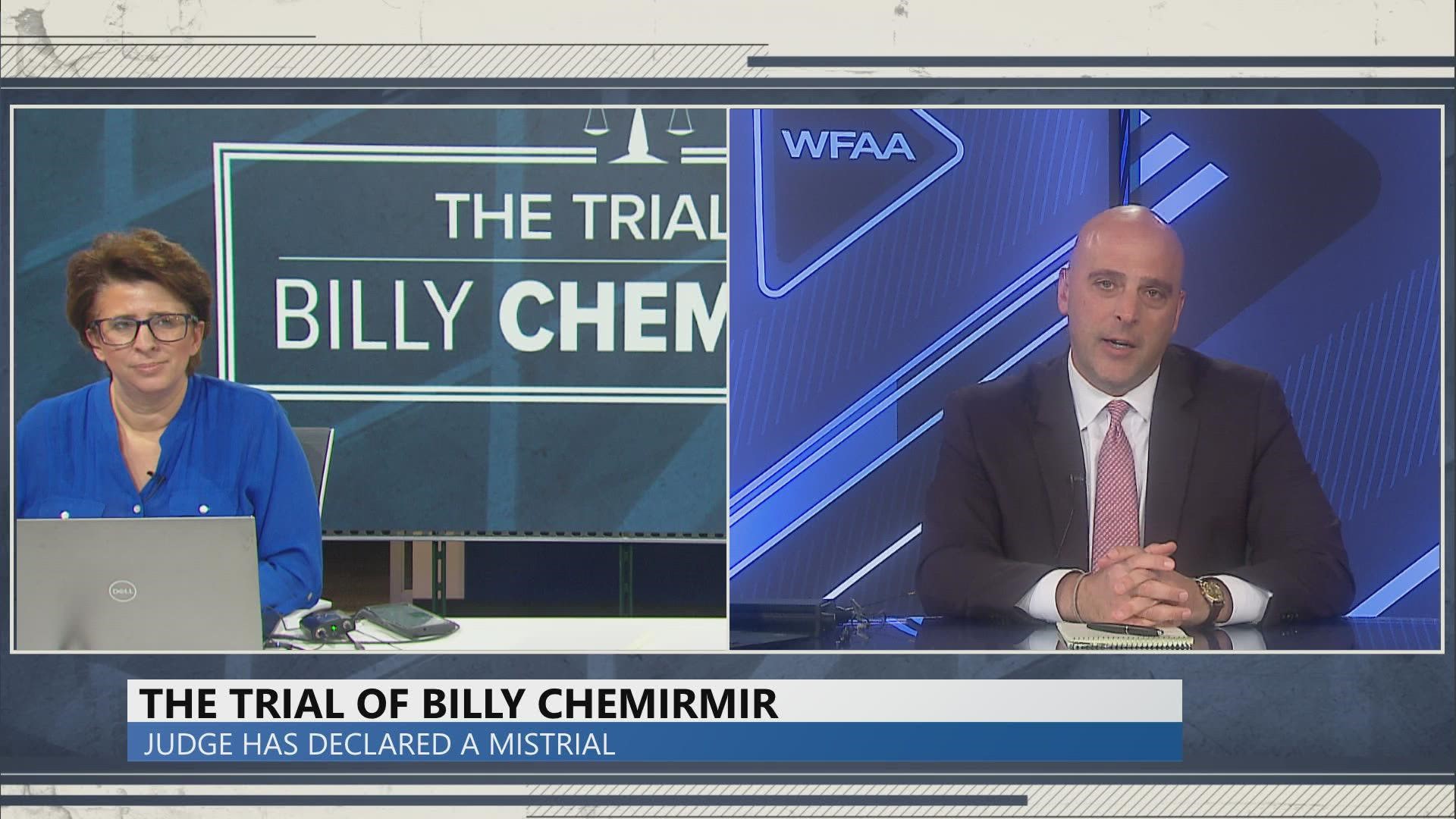 After a weeklong trial, a judge declared a mistrial for an alleged serial killer accused of murdering 18 elderly women across North Texas.

A jury failed to reach a unanimous verdict for Billy Chemirmir, who was on trial for capital murder in the death of Lu Harris, one of the victims of the killing spree he's accused of.

You can re-watch full coverage below with analysis from WFAA Investigative reporter Tanya Eiserer and other experts, along with interviews from Rebecca Lopez, Chris Sadeghi and Jobin Panicker.

You can also find trial coverage on WFAA's YouTube channel or on the WFAA app on Roku and Amazon Fire TV.

On Friday, the jury in the trial of Billy Chemirmir returned to continue deliberating the fate of the alleged serial killer, but only a few hours into the deliberations, the jury told the judge they were "hopelessly deadlocked."

Shortly after 11 a.m., jurors wrote a note to Judge Racquel Jones, saying they were deadlocked at 11-1. It was not clear why the jury was split on the case.

The jury earlier Friday morning had informed Jones that one juror would not change her stance on the trial, and Jones instructed the jury to keep deliberating. About an hour later, the jurors wrote the note to Jones, saying they were still deadlocked.

Chemirmir's attorneys asked for a mistrial to be declared, but the judge denied that request.

Families of the alleged victims reacted with shock to the jury's delay Friday morning, with one family member telling WFAA they were "sickened and astonished" at the delay.

The jury continued to deliberate after the earlier direction, but around 3:20 p.m., after the jury said again that they were still deadlocked 11-1, the judge declared a mistrial after the jury failed to reach a unanimous verdict.

After declaring the mistrial, the judge released the jury from their duty and ended the trial.

Watch a stream of Day 4's testimony below.

A manager with Diamond & Gold Exchange testified Chemirmir sold them jewelry on March 19, 2018 -- the very day Lu Harris was killed. The manager says the store paid Chemirmir $91,000 for jewelry from 2015-2018.the state is likely to make the case that the jewelry belonged to the victims Chemirmir is accused of stalking and smothering to death.

Over a three-year period (2015-2018) Diamond & Gold Exchange purchased $91k worth of jewelry from Billy Chemirmir. State likely to make the case that the jewelry belonged to the victims Chemirmir stalked and smothered to death. @wfaa #ChemirmirTrial pic.twitter.com/TbjxOhbsjC

Later, a T-Mobile professional testifier and FBI special agent Mark Sedwick testified about cellphone signal triangulation, explaining how signals may place Chemirmir close to the victims at the time of their death.

The state rested its case shortly after noon following testimony from the Dallas County Medical Examiner.

The defense eventually rested. Chemirmir will not take the stand. Closing arguments happened after the jury returned from lunch, where the prosecution said that Chemirmir's "greed was more important than the [victims'] lives."

Closing statements in capital murder trial of Billy Chemirmir. Prosecution to jury: "You know now when they were shopping he was in his hunting grounds." @wfaa #ChemirmirTrial pic.twitter.com/SvmrmbbeWL

Chemirmir's defense argued that the state gave so much evidence on other cases for the groundwork that it may have confused the jury, calling the state's case "quantity over quality" and appealing to the jurors' reasonable doubt.

The state rebutted that argument, and the jury went into deliberations around 3:45 p.m.

Defense in closing arguments: "There is reasonable doubt and it is rampant." @wfaa #ChemirmirTrial

Around 7:45 p.m., the jury went home for the day and will continue deliberations Friday morning.

The jury will not be sequestered.

Wednesday, Nov. 17, Day 3 of the Billy Chemirmir trial, started with attorneys arguing about whether Chemirmir should be allowed to wear a mask or face shield during trial when witnesses are asked to identify him in the courtroom.

Chemirmir's defense objected, saying it’s prejudicial to do so during testimony. Chemirmir wore a mask for the rest of the day.

Later, prosecutors showed video of Chemirmir and victim Lu Harris at the same grocery store the day she was killed. Police say he stalked her, smothered her and stole her jewelry.

Next, the jury saw footage of a Dallas police interview with Chemirmir. When asked what he did for a living, Chemirmir said he sells jewelry on OfferUp.

In the video interview, Chemirmir denies doing anything wrong. 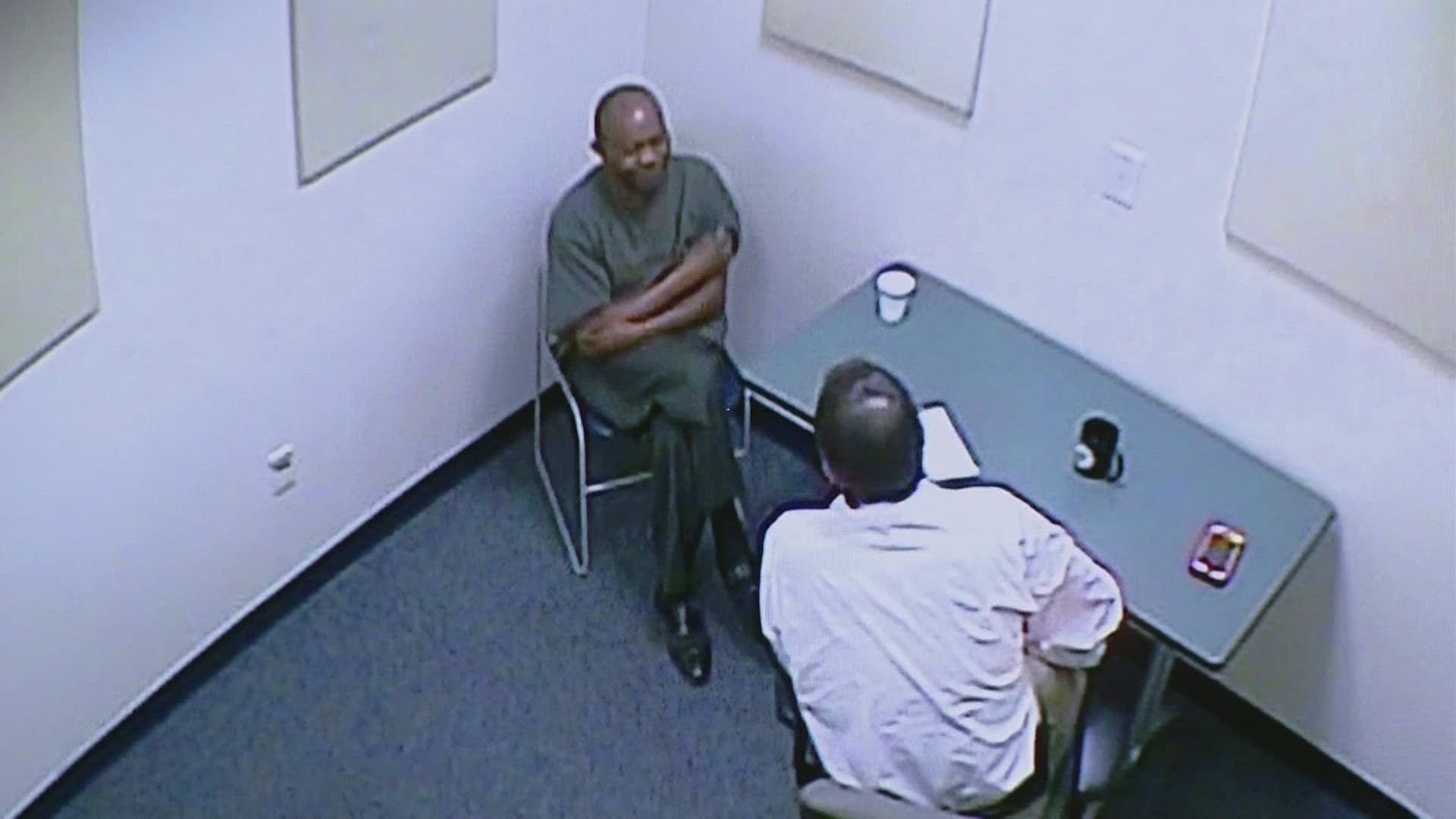 Later, more police detectives provided evidence linking Chemirmir to the victims, and another man who knew Chemirmir took the stand. That friend said Chemirmir asked him to buy a car, which he did.

The jury also saw more police interrogation videos and heard more evidence placing Chemirmir in the same spots as his victims, specifically at a Walmart on Coit Road. A man nicknamed "Mike" also testified that he bought jewelry from Chemirmir.

The jury also heard from the daughter and grandson of alleged victim Mary Brooks. Those two testified about the circumstances surrounding Brooks' death.

We are hearing from the grandson of Mary Brooks. She is one of Chemirmir's alleged victims. The grandson did a wellness check the night of Jan 31st. "I knew something was wrong when the gate was open." @wfaa #ChemirmirTrial pic.twitter.com/ZSVlqlH4oA

Watch a stream of Day 3's testimony below.

More trial testimony from law enforcement officials continued Tuesday as lead Dallas Police homicide detective Casey Shelton started the trial by talking about the investigation into Lu Harris' death in 2018. Chemirmir is on trial for allegedly smothering Harris to death and stealing her jewelry box, which police were led to from an investigation into the smothering of Mary Bartel in 2018.

Day two of Billy Chemirmir trial. Dallas Detective testifies this key ring belonged to Chemirmir and on it were keys that unlocked Lu Harris home. He is accused of smothering her and stealing her jewelry. #chemirmirtrial @wfaa pic.twitter.com/DysSgDtHod

Other state's exhibit evidence displayed Tuesday included a pillow of Harris' that had smeared lipstick on it from where Chemirmir allegedly smothered her before stealing her jewelry box.

"She was a very funny person, very humorous, and very generous. My mother-in-law was a hoot," Richard Philip Rinehart said.

#NOW Son-in-law of murder victim Lu Harris: "She was a very funny person, very humorous, and very generous. My mother-in-law was a hoot." @wfaa #ChemirmirTrial pic.twitter.com/D428xjEPJd

He also identified the red jewelry box police found in Chemirmir's possession at the time of his arrest as that of his mother-in-law.

This very unique red jewelry box belonged to Lu Harris. This box was recovered from Chemirmir during his arrest. Son-in-law identified it immediately after detectives showed pictures of it. @wfaa #ChemirmirTrial pic.twitter.com/6vZwz0Mok6

Testimony ended quickly Tuesday at the midday lunch break due to some scheduling conflicts with the prosecutor. The court is in recess until Wednesday morning at 8:30 a.m.

Outside the courtroom, other victims' families watched the proceedings together and reacted to Tuesday’s testimony.

“It’s hard to look at him and see the eyes and know what he did,” said French House. “He was in my mom’s room for over an hour and he is what she saw in her last moments of her life and I’m sure she was terrified.”

Loren Adair-Smith’s mother Phyllis Payne died on May 14, 2016. She says hearing about the life of Lu Harris reminded her of her mother.

“I think it’s wonderful that they brought her to light and showed the person she was. As our mothers were just as vibrant and living wonderful people," Adair-Smith said.

Watch a stream of Day 2's testimony below.

Day 1 of the trial started with Chemirmir pleading not guilty around 8:30 a.m.

The prosecution made the first statement, saying the trial would be "a case of stalking, smothering and stealing."

The defense made no opening statement.

While the trial is about determining whether or not Chemirmir murdered 81-year-old Lu Harris in Dallas, the prosecution spent most of its time Monday morning establishing a case in the attack on 91-year-old Mary Bartel, who Chemirmir is accused of robbing and smothering with a pillow in March 2018. Bartel survived the attack, and her evidence was what led officials to Chemirmir for other crimes.

Billy Chemirmir is suspected of killing 18 elderly women by smothering them and then stealing their jewelry. These are some of the families on the first day of his trial. @wfaa pic.twitter.com/HUtjl9D7xz

Bartel died in 2020, but a recording of her deposition about the attack was played in court Monday, and the prosecution also brought forward a Plano 911 dispatcher, Plano firefighter and Plano police officer to testify about the initial alleged attack on Bartel.

Bartel testified when she opened the door on March 19, 2018 she was fixated on a pair of green gloves.

“I knew then I should not have opened the door and I was in danger," she testified in a previously recorded video played in court Monday. She says a man told her to get on her bed and smashed a pillow over her face. 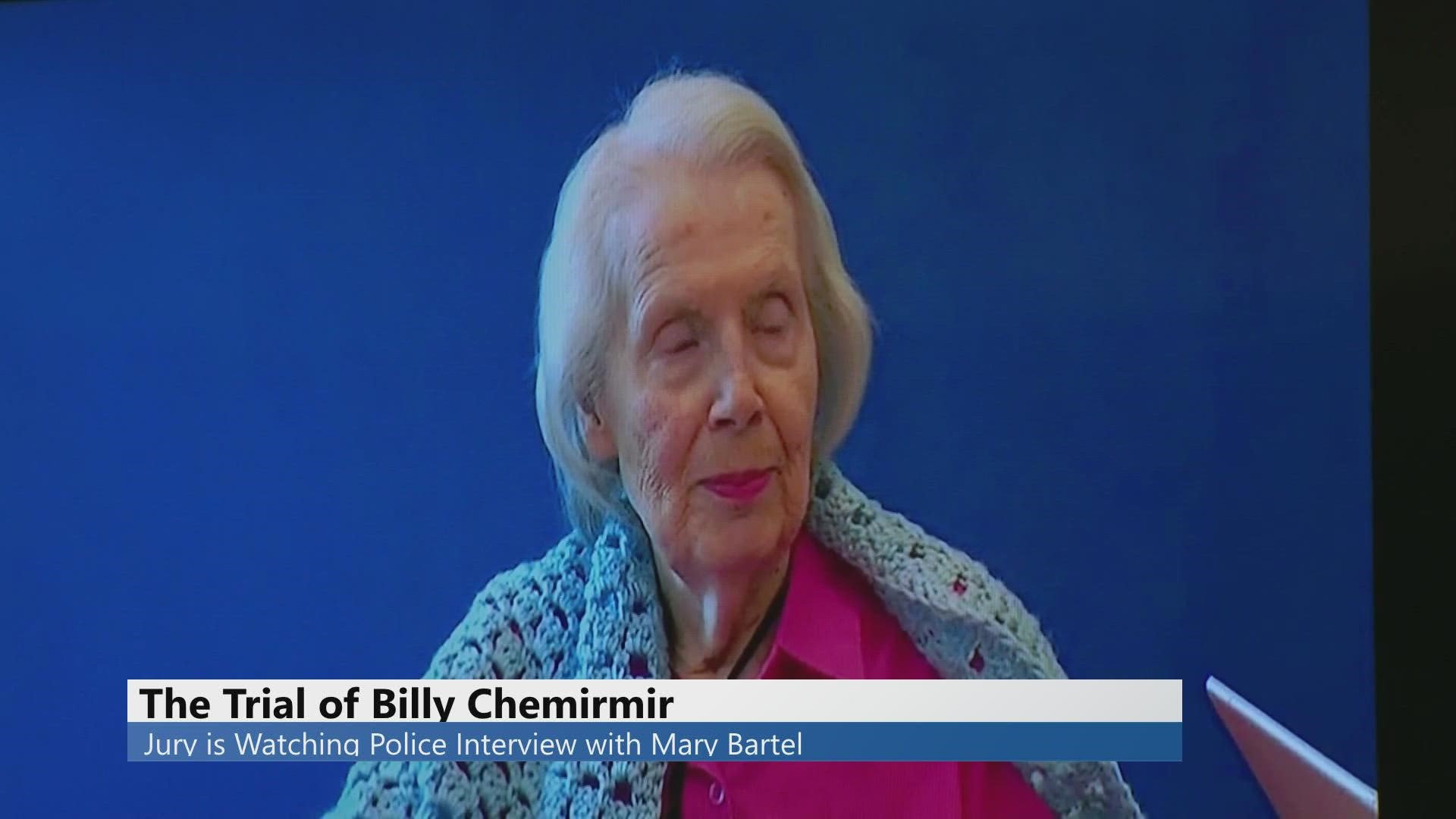 After the lunch break, the first witness to take the stand was Bartel's neighbor's son Richard Plinck, who testified that he spotted a man outside Bartel's apartment building.

When he returned two and half hours later, that man was still there. So he asked the man if he needed help. He also wrote down the man's license plate, which ultimately linked to Chemirmir.

Garcia testified about the items found when Chemirmir was arrested; some were found in a dumpster and some in a vehicle. Police found numerous pieces of jewelry and $2 bills.

Watch a stream of Day 1's testimony below. 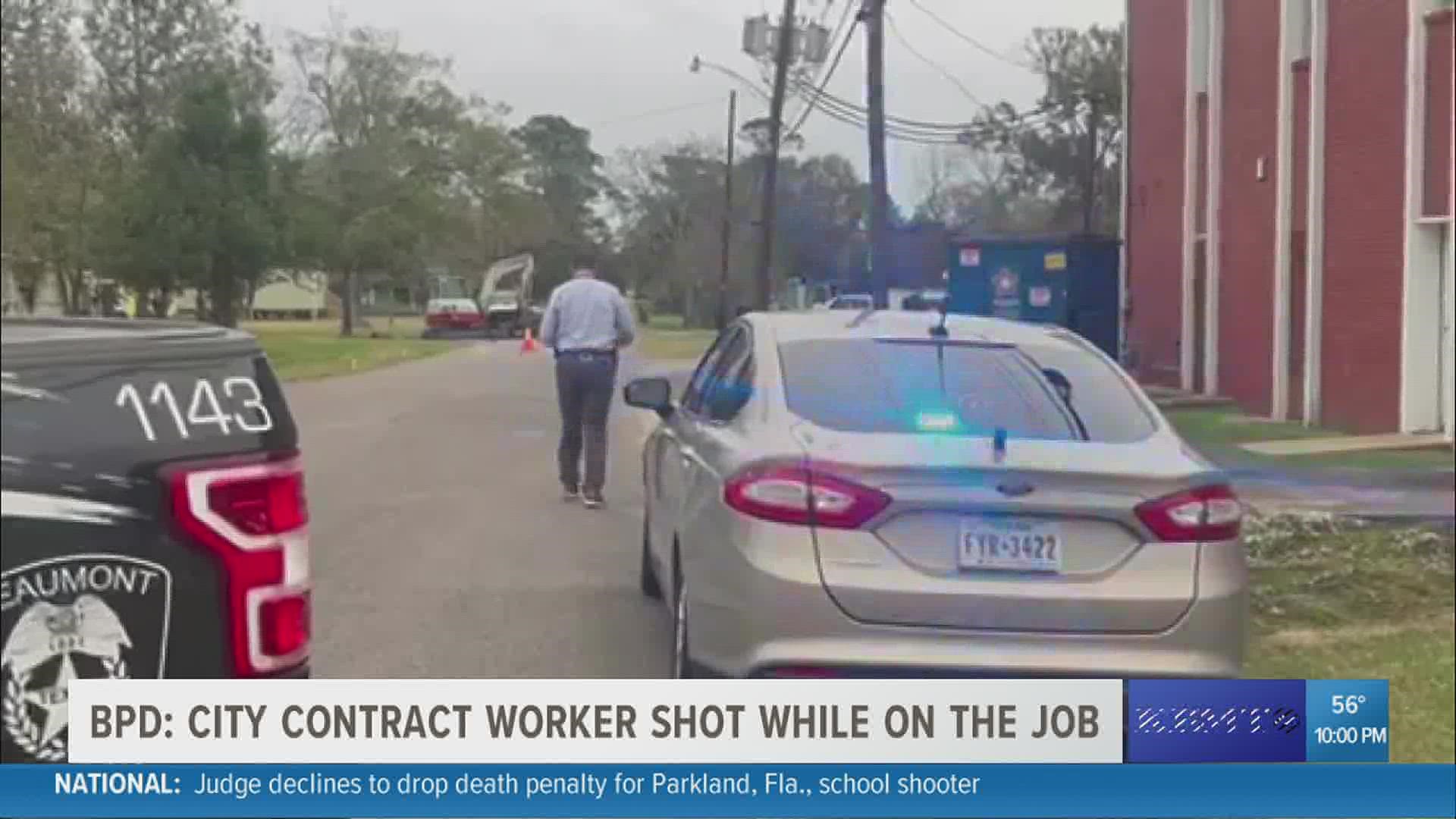