Houston Police say two suspects are in custody after an attempted burglary and shooting at a gun store along the Katy Freeway overnight. 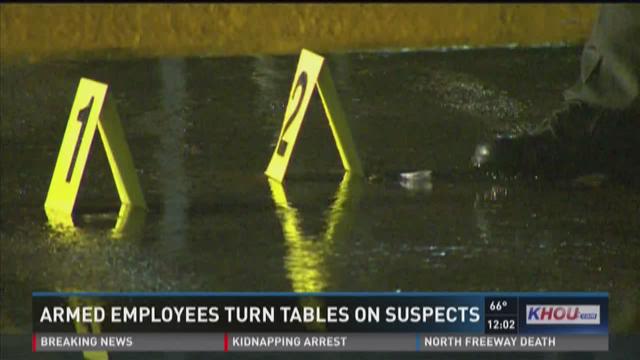 HOUSTON – Houston Police say two suspects are in custody after an attempted burglary and shooting at a gun store along the Katy Freeway overnight.

Around midnight Monday employees called 911 after hearing several men try to break into their business, Full Armor Firearms, located near Dairy Ashford. The workers say they armed themselves and went outside to hold the suspects at gunpoint.

Two of the suspects stayed at the scene, but two others jumped in a vehicle to get away. Police say as the men were driving off, they fired shots at the gun store employees, so the employees returned fire with an AR-15.

Police arrived and took the two remaining suspects into custody. About 30 minutes later a man showed up at a hospital with a gunshot wound to the back, possibly tied to the attempted burglary and shootout.

The investigation is on-going.

Police say they found new tennis shoes and electronics in the suspects’ vehicle still at the scene. Police are trying to determine if the items were taken in other burglaries.

The workers tell police they were staying at the store overnight at the request of the owner because of recent break-ins at the business.

Call Houston Crime Stoppers at 713-222-TIPS if you have any information.