"The police department just can't be the only ones who are out making sure children are doing what they're supposed to do, that's what their parents are there for." 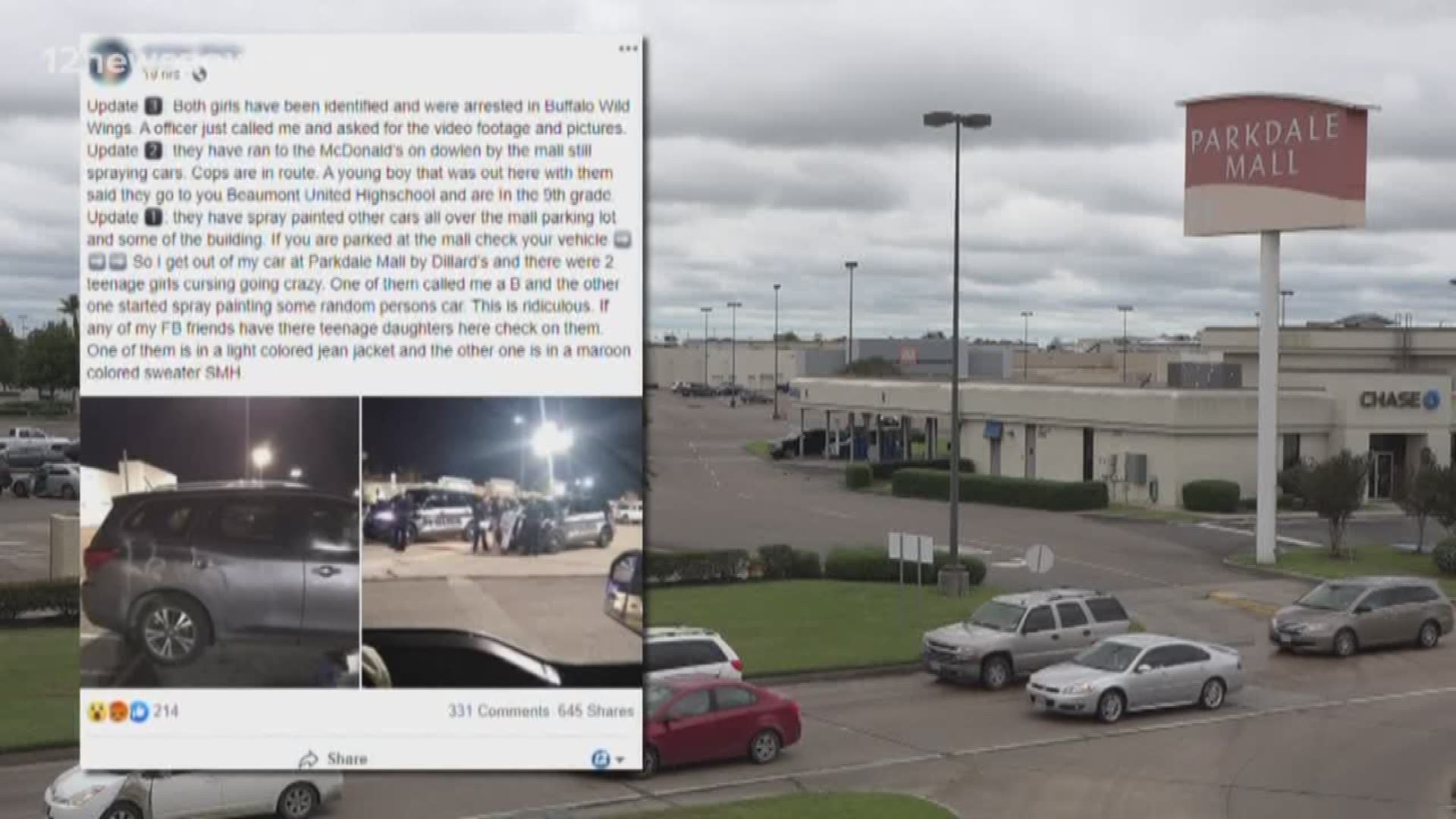 BEAUMONT, Texas — A group of teenage girls are in trouble after they were caught vandalizing a car at Parkdale Mall Saturday night.

Beaumont Police officer Haley Morrow said police were called in reference to kids possibly spray painting cars. They later learned it was actually some kind of sidewalk chalk that washes off with water. It's a class "C" offense of criminal mischief.

Police were able to locate the girls, and learned that the victim knew one of them. The teens were released to adult family members, and the victim was referred to the municipal court to file the offense.

"Unfortunately this is just another case of juveniles being unsupervised, the police department, the mall, businesses are not day care centers for juveniles," Morrow said.

Although it's just a class "C" offense, Morrow says parents need to understand the gravity of the situation. She says if kids are allowed to continue on the path to juvenile delinquency, it's going to escalate into something bigger.

"The police department just can't be the only ones who are out making sure children are doing what they're supposed to do, that's what their parents are there for," Morrow said.

Morrow says they've seen an increase in businesses in the area wanting officers to work security because kids are out of control. She's not sure what the solution is, but she says they need cooperation from parents.

"Every time an officer is called to parent a child, that's taxing our resources where we can be answering calls for service where people really do need help," she said, "so it's frustrating and you know it's just something that we need parents to participate in, we need parents to participate in raising their children, it's a cycle, it's an ongoing issue and our hope is that the wake up call isn't something that is devastating.."

When the "Dads on Deck" saw what happened on Facebook, they knew that something needed to be done.

The group started back in December after a video surfaced of a group of teenage girls beating up a young girl and her family at a McDonald's nearby.

RELATED: 'Girls were getting on top of the car' | 13-year-old attacked at Beaumont McDonald's says threat started months ago

After this past weekend, the group decided to spring back into action. Last month Geary Seniguar told 12News he started the group because it seems like our youth has no guidance, and they saw a need for a good father's presence.

Seniguar posted to the Dads on Deck Facebook page Saturday that they're working on finding ways to permanently patrol the mall. They plan to be in attendance the remainder of the year (starting with monthly schedules), until "inappropriate behavior is rectified."

Seniguar says it will take people from all types of backgrounds to work together and be consistent and persistent. They plan to be at the mall Saturday, January 18th, if weather permits.

"This is the last Saturday for this type of behavior to take place at the mall," Seniguar said.

Morrow says social-media can be a double edged sword, because posts and incidents aren't always 100% accurate. They caution people to be aware, trust official sources, like the police department and if you have questions, she encourages you to message their Facebook page. That being said, she went on to say that if you see something, it's important that you call police right away.