K-9 Verro was able to squeeze through the partially open kennel door which allowed him to crawl into the front of the SUV. 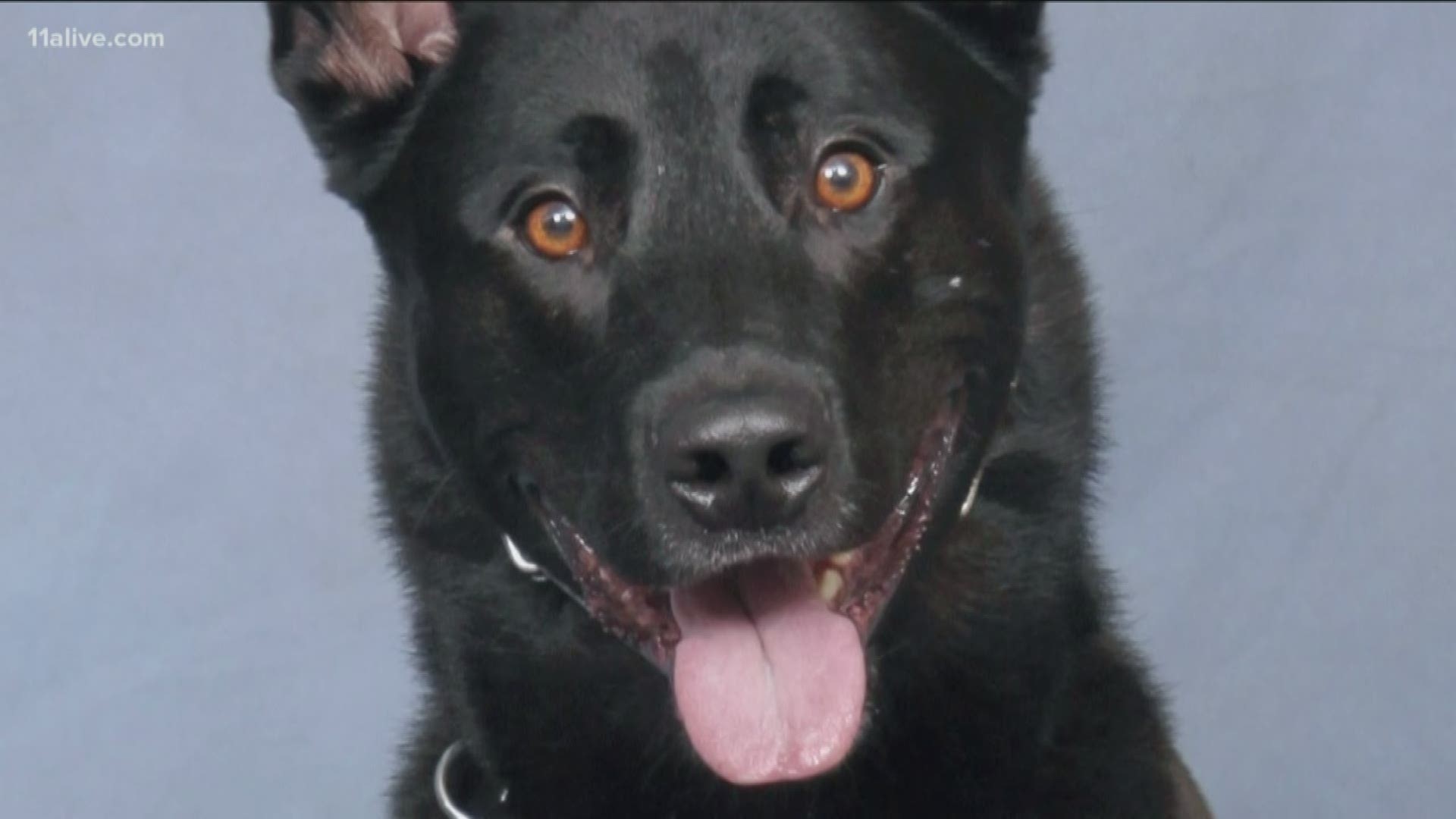 DALLAS, Ga. — A confusing and chaotic scene led to the shooting death of a K-9 officer in Paulding County on Friday.

Just after noon on Friday, deputies responded to a domestic dispute in Dallas, Ga. Prior to their arrival, the suspect in the dispute left the scene.

When responding deputies arrived in the area, they located a male matching the description of the suspect in a silver passenger car still inside the neighborhood. When they initiated a traffic stop on the vehicle, the passenger, who was later confirmed to be the suspect from the domestic dispute, ran from them, they said.

As more deputies responded to the scene, the male suspect “continued to jump over fences and run through yards in an attempt to get away,” Paulding County Sheriff’s Office Sgt. Ashley Henson said.

A short time later, Cpl. Brandon Kilgore arrived on scene with 8-year-old K-9 Verro and observed the male suspect running in the area of Brooks Road and Trotters Way. Kilgore "quickly stopped his patrol vehicle and gave chase" on foot without Verro.

“Handlers are trained on specific rules regarding the deployment of their K-9 partners,” Henson said. “At the time Corporal Kilgore arrived, the departmental criteria to deploy the dog had not been met, so he did not release K-9 Verro.”

A series of "tragic" events followed.

K-9 Verro was able to squeeze through the partially open kennel door that separates his vehicle kennel from the drivers compartment which allowed him to crawl into the front of the SUV.

The sheriff's office stated that standard practice when looking for a suspect fleeing on foot would be to have your vehicle windows partially or completely down so you can listen for the suspect. The front driver’s side window of the patrol vehicle, a 2015 Chevrolet Tahoe, was partially down. K-9 Verro was able to inch his way out of the vehicle in an attempt to assist his handler, the release mentioned.

“K-9 Verro was the kind of working dog that any handler would dream of,” Henson said. “He had a high drive to fight crime and was relentless in his work ethic. Anyone that knew K-9 Verro knew how attached and protective he was of his handler, Cpl. Kilgore. When Cpl. Kilgore left his patrol vehicle chasing someone, K-9 Verro wanted to be with him as the two were inseparable.”

As the "chaotic" scene unfolded, no deputies were aware K-9 Verro was out of his vehicle, according to a report.

“Had Corporal Kilgore known K-9 Verro was loose, he would have advised the other Deputies to stop the foot pursuit and taken command of K-9 Verro,” Henson said.

Shortly after K-9 Verro exited his vehicle, he observed a deputy sprinting away from him. In the absence of his handler’s direction, the report said that K-9 Verro could not differentiate between the deputy and suspect. K-9 Verro apprehended the deputy by grabbing the back of his leg and followed his training by biting and holding until he was commanded to release, the report said.

The Deputy, who had been bitten from behind while running, “had no idea the dog was actually a law enforcement canine,” Henson said. Unable to remove the dog from his leg, the deputy followed his training, drew his service weapon and shot and killed K-9 Verro.

A short time later, the suspect was taken into custody by other deputies in the area.

The deputy who was bitten has some injuries as a result of the apprehension but will heal with time.

“Being a former K-9 handler, I know how special the bond is between a handler and his dog,” Paulding County Sheriff Gary Gulledge said. “The emotional grief everyone is going through, including the deputy who was bitten, has been overwhelming.”

Bear evading police in search for food through Duluth yards