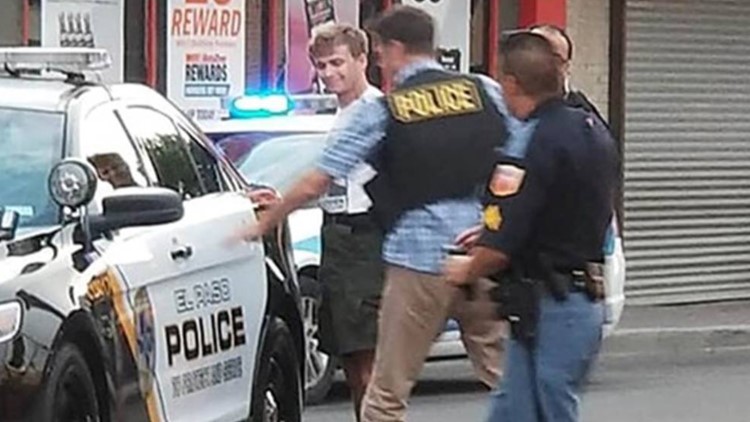 EL PASO, Texas — An armed Trump supporter was detained and released by police Wednesday outside a community space for immigrants in El Paso, Texas, days after a mass shooting that killed 22 people at a Walmart in the border town.

Witnesses said they called police after Thomas Bartram, 21, made threatening comments to people and brandished a knife while sitting in his truck outside of community center Casa Carmelita. His truck was emblazoned with pro-Trump banners and bumper stickers promoting InfoWars, a far-right conspiracy website and radio show.

“Central patrol officers responded to a suspicious subject at the 900 block of Stanton near Casa Carmelita,” the El Paso Police Department tweeted on Thursday. “The subject was detained, interviewed and released after it was determined that no criminal offense had been committed.”

Video of the incident, recorded by a witness from the roof of Casa Carmelita and viewed by NBC News, shows Bartram wearing blue latex gloves as police search him.

Other community members posted photos they had taken earlier in the day of Bartram attending vigils for the victims of the massacre, which targeted hispanic immigrants, according to a racist screed allegedly written by the gunman.

Reached by phone, Bartram said he often went to Trump rallies, but said he tried to be respectful of the high tensions in El Paso following the shootings—though he said he could not rule out the possibility that the massacre had been a “false flag” perpetrated by the government.

Bartram acknowledged he was legally carrying a pistol but denied waving it around, and said the gloves and knife could be explained. “I was eating prickly pears,” he said. The white powder was a protein supplement Bartram said he takes along with other Alex Jones’ branded nutritional supplements.

Bartram is no longer in El Paso but on his way to Portland, Oregon, to attend a protest that local officials have warned is expected to turn violent.

"People can interpret my political opinion outside what they are; that’s their right,” he said. “But I’m definitely not a white supremacist.”

Ana Deveze, of Casa Carmelita told NBC News that police also recovered a loaded gun, ammunition and a bag of white powder from the man's truck. She said people at the community center are still “terrified” and “frustrated.” Deveze said El Paso police officers were confrontational with the witnesses and eventually told them Bartram hadn’t broken any laws.

“He has rights,” Deveze said police told her.

The El Paso police did not respond to an NBC News request for comment.

Bartram had been featured in a Washington Examiner article on Wednesday. The article included a photo of Bartram making a hand signal often used by white supremacists and standing alongside his truck, the back of which was covered with a banner of Trump dressed as Rambo and a bumper sticker of George Washington that reads “Me and my homies woulda been stacking bodies by now.”

“It seemed like the right thing to do, to come out and support Trump,” Bartram is quoted saying in the article.

Bartram is an active member of the InfoWars community forum, commenting under a his own name and linked to a YouTube account where he posted two videos. One video shows him walking around with a flag in support of open carry laws and the other is of an unknown man appearing at a vigil for a woman murdered in May.

Bartram’s brother, Alex Bartram, 27, told NBC News in a phone interview that his brother had gone to El Paso with a group of Trump supporters he had been hanging out with lately.