Breaking News
More () »
Together We Rise

A dangerous journey to US citizenship: How an unaccompanied teen endured and reunited with his mother 10 years later | Together We Rise

After a Honduran mother left to provide for her family in the U.S., her 17-year-old son took the same journey—and found his second chance at life. 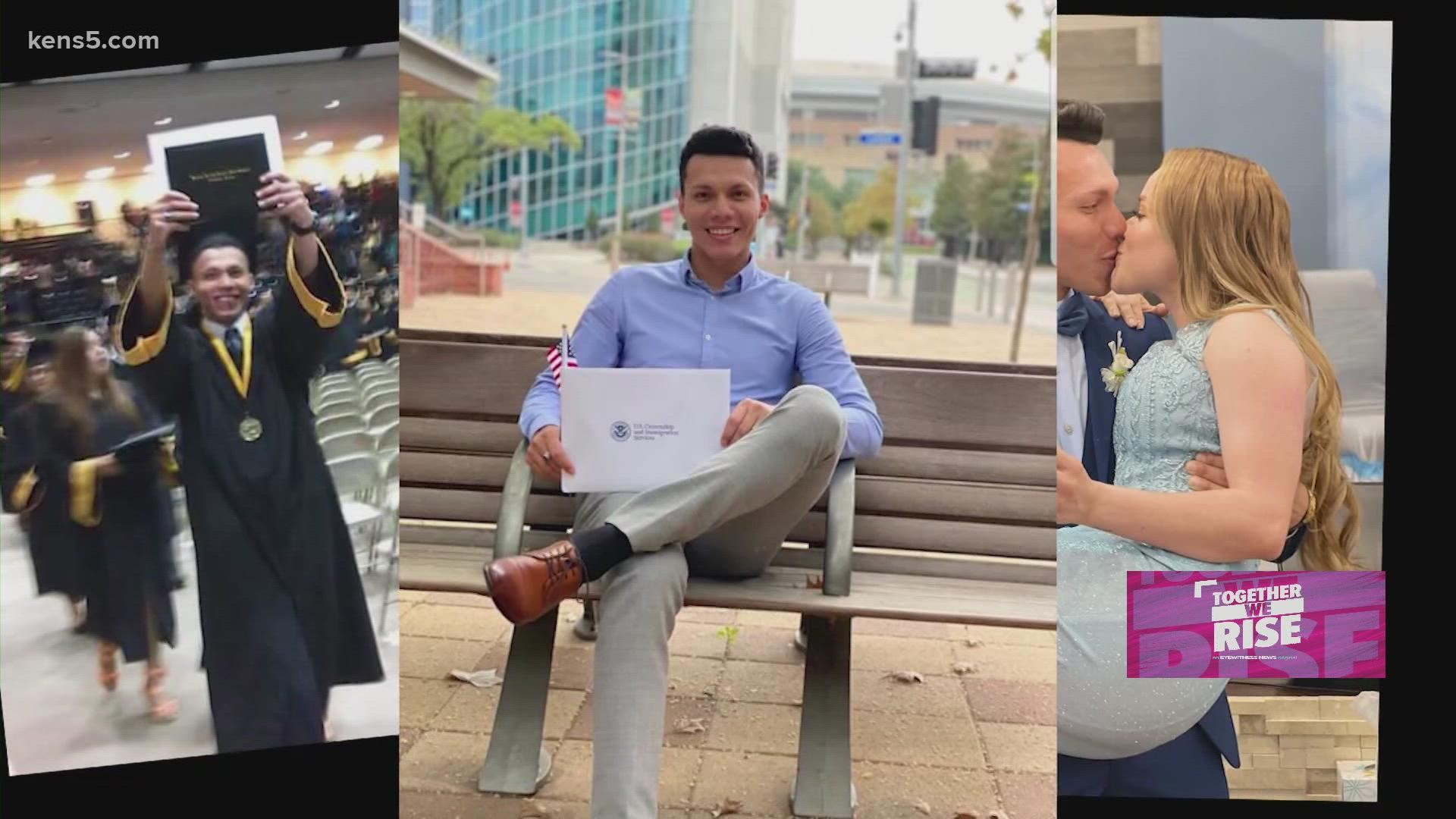 HOUSTON — Second chances are a beautiful thing, but they come at a cost.

Oscar Gonzalez knows about that cost. Life introduced him to it  when he was just 7 years old, when his mom left Honduras, Oscar and his siblings to find work in America.

“I think I didn't understand what was happening,” Gonzalez told KENS 5, “I probably thought it was just gonna be a regular [day]. She was gonna go to work and then come back later.”

Gonzalez and his siblings stayed with their grandma. Years later, he said he understood the extent of his mom’s sacrifice; the burden of having to leave her children so she could afford to raise them, sending money home from the U.S.

“Her purpose was to give us a better life,” Gonzalez said.

But Gonzalez was just 7 at the time, and that little boy missed seeing his mom.

“It was really hard for all of us,” he said.

Gonzalez told KENS 5 he dropped out during middle school and went to work.

“Back home, if you want to go to school, it’s a lot of money you had to pay, and also it’s a lot of responsibility that you have,” he said. “You need to work.”

Ten years after his mom left, Gonzalez, now 17, said he decided to make his own way to the U.S. against her advice.

“That’s what I started to think about: the second chance that I wanted in life. I wanted to go to school, I wanted to have a decent job,” Gonzalez said. “I was kind of scared. You hear a lot of stories that, you know, some people, they leave the house and they never come back.”

Gonzalez said he walked a lot of the way from Honduras, journeying through Mexico and taking the train known as La Bestia to get closer to the U.S. border.

“They tell you not to fall asleep, but the night is too long. The days are too long,” Gonzalez said, describing his time on La Bestia. “They will fall asleep and the next thing you hear, someone falls to the wheels. You just heard that scream at nighttime and then you heard those noises, like something was breaking. You don’t know how to feel at that moment. It’s terrifying, it’s horrible. You don’t know what to do.”

Gonzalez said he used his belt to tie himself to the pipes or ladders on the train to keep from falling off.

“You just pray to God asking him to help you, to get where you need to be and you try to move on,” he said.

Gonzalez said he crossed the border in Laredo. At first he tried to run, but eventually surrendered to Border Patrol.

He was released from detention to his mother, who he saw for the first time since he was a little boy.

“I haven’t seen my mom in a long, long time,” he said. “I got to the door, I open [sic] the door and I see this short woman. I close the door and I turn back around.  And then my mom was like, ‘Oscar.’ I was like, ‘Oh, that’s my mom.’ That was her voice. Because I didn’t recognize her. I did not recognize her! I was expecting the same woman that left when I was little.”

“I remembered her just calling out my name and that’s when I knew, That’s my mom,’” Gonzalez added. “Because the only thing I knew about her was her voice.”

The price of second chances is high, but the rewards are what push us to try.

‘I remember I held her and I couldn't believe it,” Gonzalez said. “I was like, ‘Mom, I'm so sorry. But, you know, I just, I couldn't recognize you.’ It was a beautiful moment.”

Ten more years have passed since their reunion, full of the opportunities and rewards Gonzalez was hoping to discover as he journeyed through central America.

First, he finished high school. Then came college, falling in love and getting married.

A lonely journey to US citizenship: Honduras man shares the story of his trek as an unaccompanied teen

During that time, with the help of two immigration attorneys, Gonzalez went before a Houston immigration judge who granted him permanent residency in 2012. Recently, he took his citizenship journey even further when he swore an oath to this country.

Now 27, Gonzalez said he will never take his second chance for granted.

“The way that I'm living now, it's not the American Dream, it's my dream,” he said. “It’s a long journey and I'm just learning. I take it day by day. When I look back, yes, I made it. It’s worth everything.”