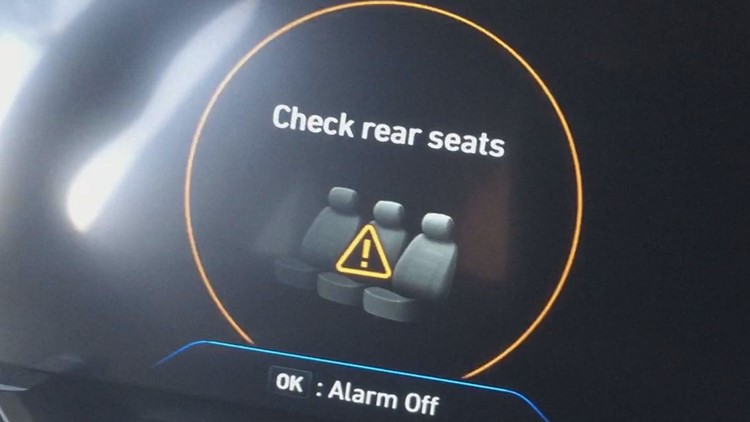 AVONDALE, Ariz. — When it gets hot out, cars get even hotter -- turning your four wheels into an oven.

According to KidsandCars.org, 39 kids nationwide have died in hot cars in 2019. Three of those have happened in Arizona (Gilbert, Glendale and Lake Havasu) with a half a dozen close calls.

In almost all the cases, police said an adult forgot the child was in the back seat.

There are some cars you can buy that come with an alert system, like the 2020 Hyundai Santa Fe and Palisade.

The sensors are installed on the sides and the roof liner of the driver and passenger side that'll sense any motion or movement in the rear seat.

After you come to a complete stop and put your vehicle in park, you turn your vehicle off and open your door. You're going to get an initial warning that says, "check rear seat" on the dashboard.

Once you turn your vehicle, exit the vehicle and lock it, if it senses someone in the rear seat, both of your lights will start blinking along with a loud and constant horn sound, said Adam Breen with Earnhardt Hyundai in Avondale.

The rear occupancy alert system will also send a text to your smartphone letting you know someone may be in the backseat.

Nissan and GM cars also have vehicles that offer rear seat alert systems. Some systems are just reminders on the dashboard and others have motion detectors.

But these seat alert systems are just another tool and not a substitute for visually checking the back seat. The motion detectors may not identify a sleeping child.

Breen says parents are gravitating towards the new features.

“They're absolutely loving it because they understand it's an extra layer of not only safety but remembrance for everything going on in and around their vehicle,” said Breen.

Breen says the rear occupancy alert system come standard in the 2020 Hyundai Santa Fe and Palisade in all price ranges.