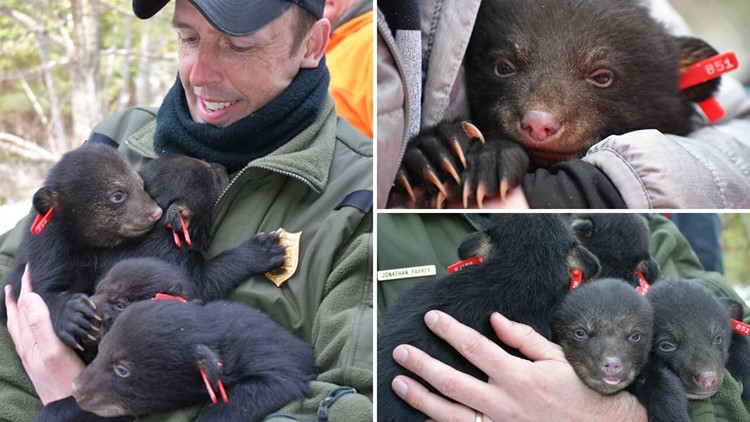 Game Wardens get bear hugs while on annual survey in Maine

MAINE, USA — Game Warden Jonathan Parker’s Facebook page is overflowing with photos of wildlife—moose, deer, owls, turkeys, and now…bear cubs! On Monday, he posted photos holding bear cubs with the caption, “What an awesome day at the office!”

Mark Latti, communications director of the Maine Department of Inland Fisheries & Wildlife, says each year the department’s “Bear Crew” visits the dens of over 70 female bears, called sows, in order to monitor the health of Maine’s bear population.

Parker’s post says “Special thanks to the Bear Crew for what you do day in and day out! Your hard work doesn’t go unnoticed! Keep up the great work!”

“Biologists trap these bears with foothold traps and affix a tracking collar to the female bear so they can visit their den in the winter to see if the sow gives birth to cubs, and then a year later, see if the cubs survive and how fast they have grown,” Latti said.

Latti says biologists will also weigh and measure the cubs and the sow, and affix ear tags and a number tattoo on their inner lip, which helps the department monitor weights and growth.

The data provides insight into the health of the bear population in Maine.

“Maine is home to a growing bear population that now numbers over 35,000,” Latti said, “and bears can be found throughout the state in all 16 counties.”

RELATED: PHOTOS: Happy National Love Your Pet Day to you and your furry friends