Cathlyn and Michael Davis met on a flight when a pastor sat between them and engaged them in a deep conversation about faith. That pastor officiated their wedding. 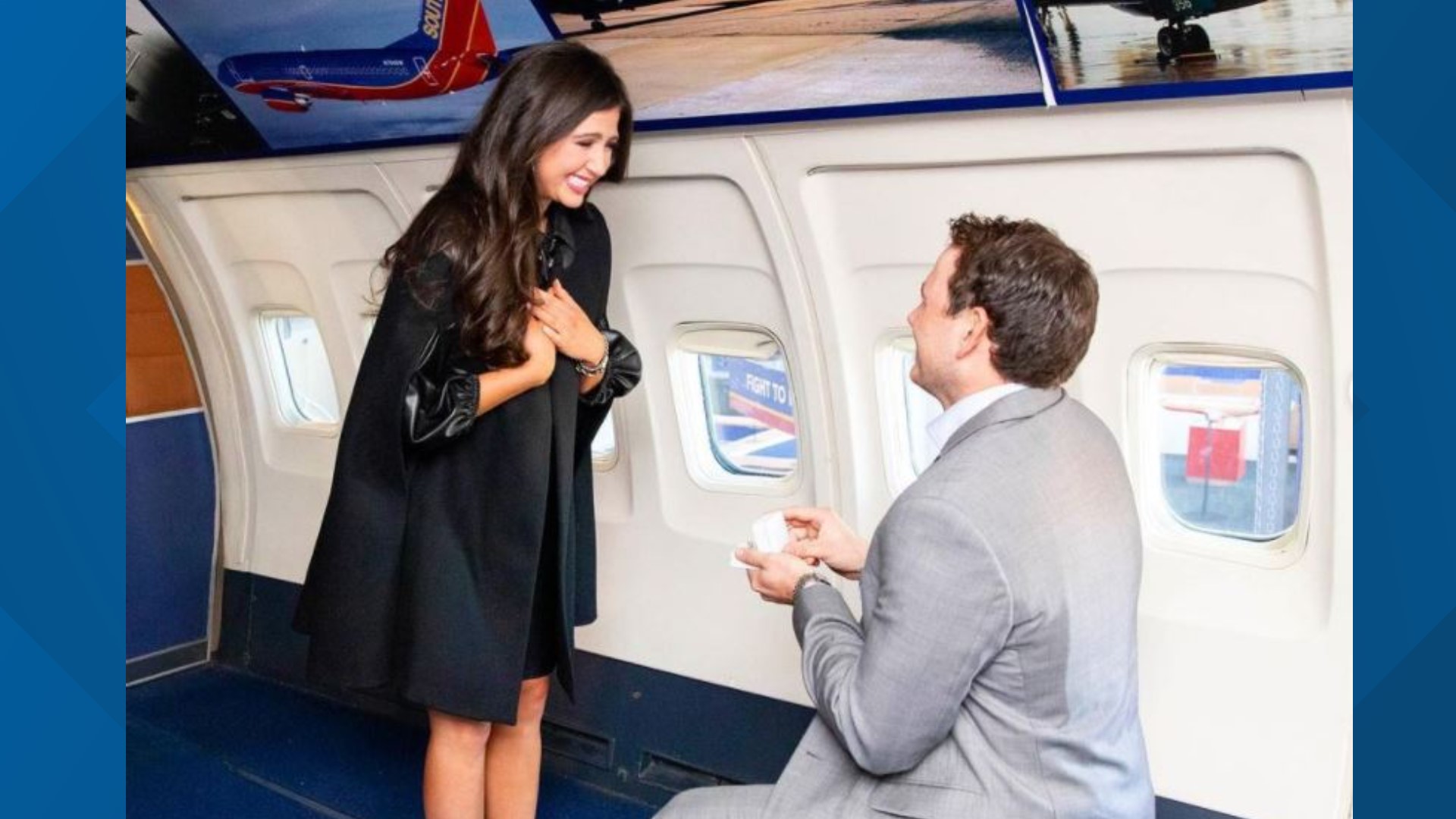 DALLAS — More than 7 million people live in the Dallas area.

More than 325 million live in America.

And we share the planet with more than 7 billion fellow human beings.

Finding your perfect match amid all those people sounds daunting here on earth.

A 5 a.m. Monday flight home to Dallas after a girls’ weekend in New York City sounded like a good idea when Cathlyn Jones was booking it.

But the night before taking it, “I was absolutely dreading it,” she said.

“I had to wake up at precisely at 3:30 in the morning to get to LaGuardia.”

She even told her sister that she wasn’t going to wear makeup to the airport. She planned to put it on while on the plane or in an Uber on her way to work once she landed.

Cathlyn’s sister told her to not to do that “because you’ll never know who you’re going to meet.”

Michael Davis, a minor leaguer who was in the Minnesota Twins system, was flying back from visiting a friend.

He was hoping to sleep the entire trip after getting little rest over the weekend.

Cathlyn boarded Southwest flight 2142 to Love Field and, thanks to the airline’s open seating policy, she headed straight for the exit row.

She had her choice of empty seats.

“It was between Michael – who’s a pretty handsome guy – and another person. I was like, ‘I’m going to go for it!’” she said with a laugh.

She sat down, leaving the middle seat between her and Michael empty.

Minutes later that seat was empty no more.

Bonny Andrews is from India and moved to America as a missionary.

He was flying to Texas for the first time and never misses a chance to start a conversation about his faith.

He introduced himself to Cathlyn and Michael. Then they introduced themselves to each other.

And for the next four hours, the conversation flowed.

“Everybody else on that plane was loving us at that hour,” Michael said. “We were telling him what to eat in Texas and where to go.”

The three of them talked about everything from food to friends to family.

They figured out Michael’s aunt and uncle were Cathlyn’s next-door neighbors when she was growing up in Austin.

“That was a little God wink,” Cathlyn said.

Credit: John Cain Studio
Michael and Cathlyn's reception featured a few nods to the airline where it all started.

“It felt very natural,” Cathlyn said. “We’re strong believers and our faith is very important to us so it was an emotional experience.”

Bonny even asked if they could pray together before the end of their flight.

“I just felt something spark there,” he said. “As a preacher, I can say it was a God connection. I mean, I meet tons of people, but certain people, you just know something just happened.”

And as they landed at Love Field, it seemed they all knew.

“We said goodbye and I texted my mom on the way to work and I said, ‘I just met my husband. I know it for a fact. Don’t call me crazy. I promise this is it,’” Cathlyn said.

Michael was doing the same time.

“He sent a text to his sister saying I think I just met my wife!” Bonny said. “I mean, that is crazy!"

Michael didn’t ask for Cathlyn’s number, which she said was a “bummer.”

But they did follow each other on social media and within days he sent her a message asking her to dinner.

The intense conversation on the plane “definitely made the first date way easier,” Michael said.

They dated for a year.

The morning Michael was set to propose, he called Bonny and asked if they could pray together one more time.

Michael proposed inside a Southwest plane at Dallas’s Frontiers of Flight Museum.

“And the next thing I know is I get invited to do their wedding!” Bonny said. “This is a crazy story for an Indian guy. You can’t even see this stuff in Bollywood!”

It was an exquisite affair that included several nods to their start in the sky.

The reception featured a photo booth with a Southwest backdrop and a row of seats.

They also put Southwest snacks in their guests’ hotel rooms.

Cathlyn said she tells her single friends to be open to finding love anywhere with anyone.

And Michael said their relationship is proof that a single interaction can change someone’s life.

“This is the ultimate love story,” Bonny said. “There are so many hurting people sitting on planes. You just have no idea. Say a word of hope.”

“The bible says to love your neighbor. Well, your neighbor is right there for the next couple hours so give them a word of comfort. It’s like a glass of cold water on a hot summer day.”

Cathlyn and Michael say they’re excited to build a life together in Dallas.

But if a job offer for another city somehow develops from someone they’re sitting next to on a flight, they said they’d have to consider making a move.